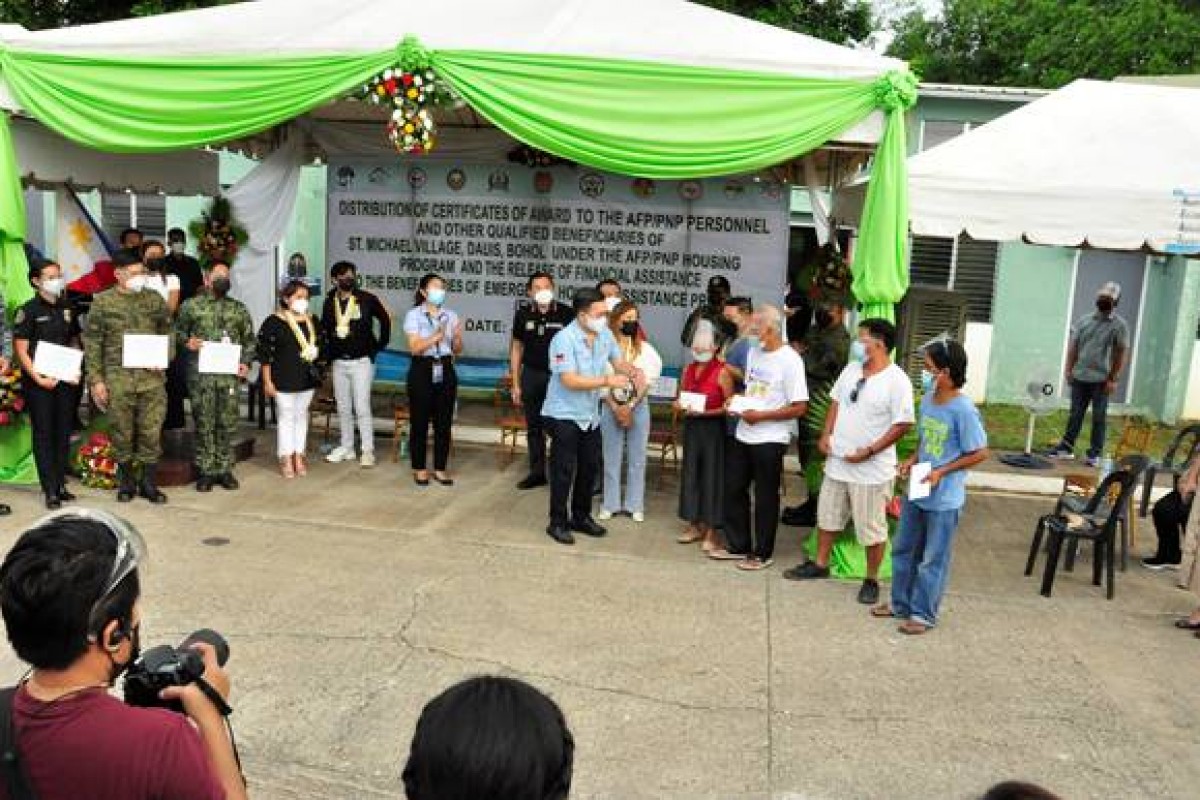 She would never have thought her luck for the day would be that much.

It was on April 17, 2021, when Carmelita Garcia woke up early and went to the town market to haggle for provisions the family would need. Her husband was already out to work and in her daughter’s hut next door, she and her kids were still asleep when she left the house.

Living with husband Luciano, 63, and her daughter who is a single mother to two kids as well as another unwed child, Carmelita has inherited the ancestral house and has allowed her daughter to put up a small house close to her parent’s old house.

"My mother lives with me, but she was visiting my sister’s house on that fateful day," Marcelina, 68, of Kalauman Poblacion Talibon, Bohol said.

“I came home that morning and saw her house razed by fire. We were just lucky no one was injured, but the fire ate up everything we kept, including our clothes,” Carmelita recalled. 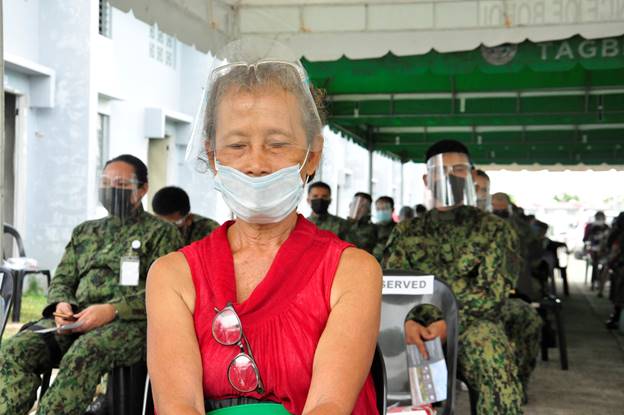 Carmelita Garcia of Talibon whose house and her daughter's hut were razed by a fire in April. She was among the recipients of the National Housing Authority's Emergency Housing Assistance Program. (RAHC/PIA7 Bohol)
Delete

A grandmother, Carmelita’s attire that day - blouse, pants, light brown semi-open faux-leather shoes - are all donations from neighbors and well-meaning citizens. She has barely enough money to pay for her way to Dauis on July 9 to attend the ceremonial release of the government’s financial assistance to fire victims like her by the National Housing Authority and Sen. Bong Go.

"It was reportedly a faulty electrical circuit that caused the fire, and the memories I and my sisters had with the old house are now ashes," she said, visibly controlling her lips from shaking.

The Garcia family has since lived on a 12x16 feet Balay sa Kabus which the family received from the private sector.

Balay sa Kabus is a small amakan house built on semi concrete foundation, and is conventionally built without divisions, she said, adding that they would have to put up blankets to cover the makeshift bedroom and provide privacy.

Carmelita, along with Dominador Sitoy of Balilihan, Seigred Wabe of Balilihan, and Arthur Nudalo of San Isidro are some of the beneficiaries of the government’s Emergency Housing Assistance Program (EHAP) under the NHA. For Garcia and the rest of the beneficiaries, they are entitled to P30,000 assistance to improve whatever it is that they have transitioned to when the fires gutted their houses. 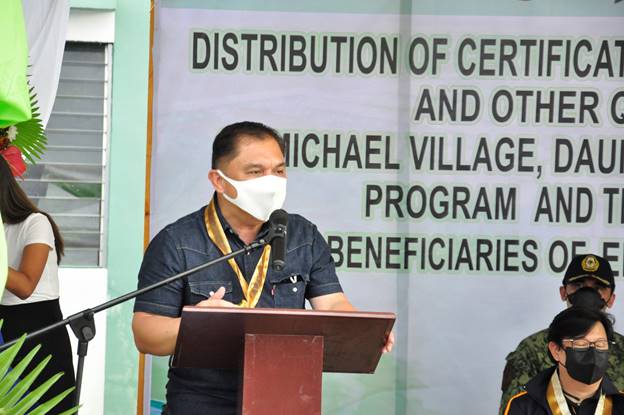 NHA General Manager Marcelino Escalada Jr., who administered the turnover of housing units to the servicemen in Bohol, also gave the EHAP to fire victims like Carmelita. (RAHC/PIA7 Bohol)
Delete

“Daku na ni og ikatabang, makahimo na mi og usa  ka kwarta, unya magbutang og extension nga kusina, aron modako na og dyutay ang among balay (This is already a big help, we can construct a bedroom and put up an extension as our kitchen so would small house can have a better space inside)," she said. The biggest thing is that she can already pay her way home to Talibon, some 124 kilometers away.

Carmelita, whom Sen. Christopher Lawrence Go saw in her flat shoes, called her to give her a new pair of rubber shoes, one she put on with the senator personally assisting. When she stood up, the envelope of EHAP cash assistance clutched tightly under her breasts, the senator again gave her a Bench wristwatch, another blessing she received just by coming to the event.

For Carmelita and the rest who are in tight situations, sometimes when the cycle moves, a single stroke of good luck could also mean pouring of more blessings for a fresh start. (RAHC/PIA7 Bohol) 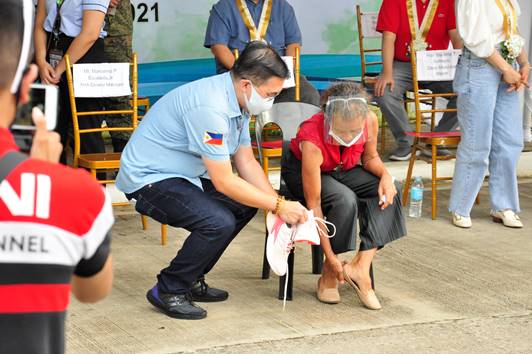 Carmelita Garcia, a fire victim, removing her flats to put on the rubber shoes given by Sen. Christopher Lawrence Go. (RAHC/PIA-7/Bohol) 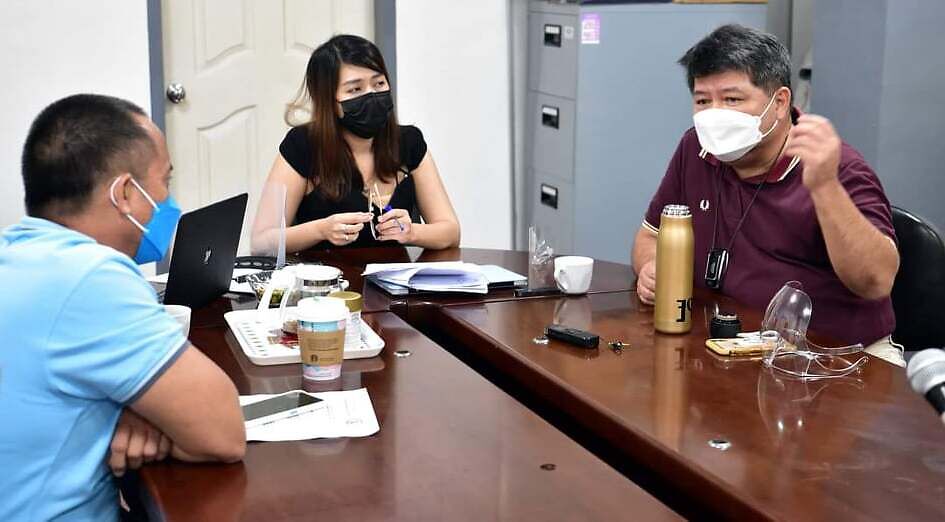 30K families in Dgte to get rice subsidy