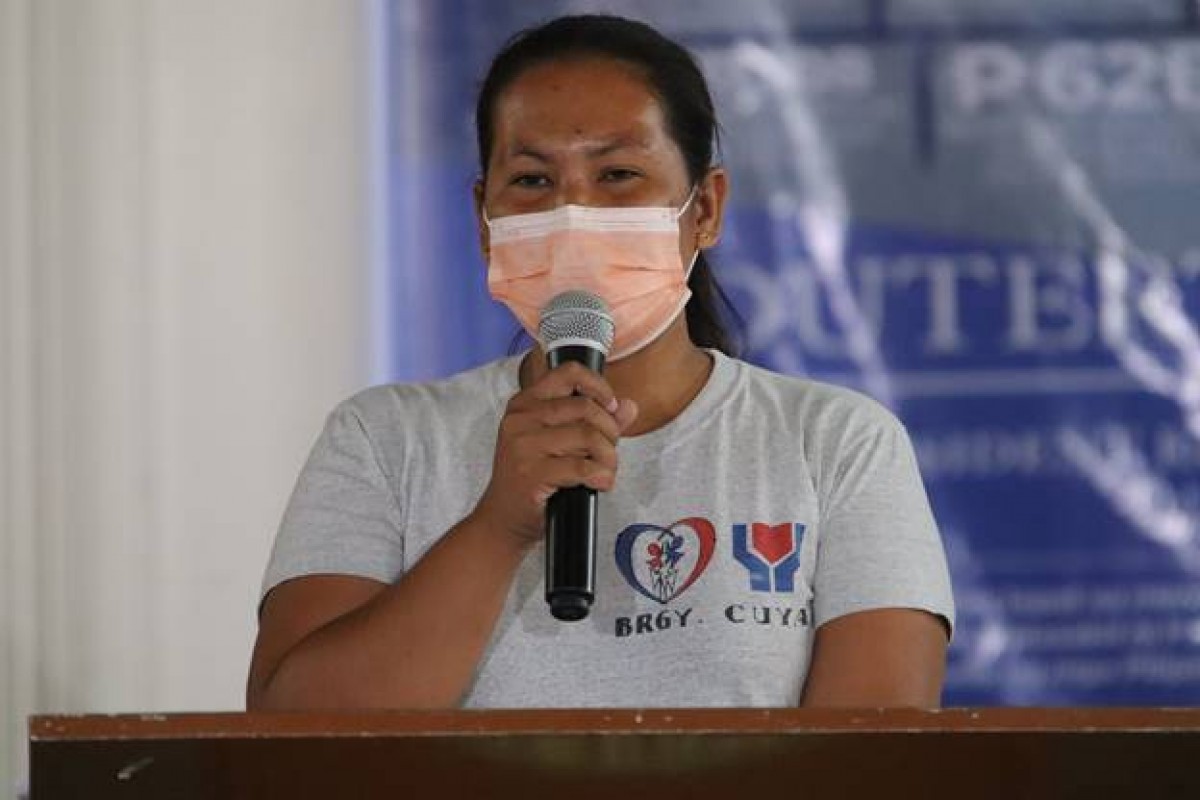 For quite some time, Isidra Donghil's family relies on her husband’s income as a fisherman.

Isidra, a 35-year old housewife from Brgy. Cuya in Ubay, said their lives could have been better had she gotten to college, as she could have better chances at landing a job. Married at an early age, she considers her family among the poorest.

Her husband’s fishing income was all they had. On stormy days and moonlit nights when there are no fishing trips, there will be no income. “Life was hard, that sometimes, our meal consists of soy sauce and lard," she narrates.

Her family lived in a small hut near the water. “Its walls were discarded tarpaulin, the roof was nipa which flips during gale winds, all of us inside would get wet. We did not have elecrtricity and as a mother, it is painful to see the kids study under the flickering glow of kerosene lamps,” she recalls, visibly flinching from painful memories she could not share as yet.

In an effort to fill in their needs, she sometimes goes with her husband fishing, or do chores that would earn her money to have something to feed the kids. She was all too resigned to that fate, when something came up which slowly changed their lives.

“It was in 2011 when the government implemented the Pantawid Pamilyang Pilipino Program (4Ps), and we were included, which gave us cash assistance for our children’s education,” she said.

The 4Ps offers conditional cash grants program to poor families who could send their children aged 0 to 8 years old in school, improve their health, nutrition, and attend family development sessions (FDS), and implemented under the Department of Social Welfare and Development (DSWD).

“With money now for our children’s needs in school, we can save the very little that’s left from fishing,” she said. “In time, we decided to build a sturdier, safer, and more comfortable house far from the water. And we had a bit of savings, enough to get us power connection,” Donghil shares in her testimonial as to how their lives changed due to 4Ps.

She said FDS are monthly meetings where she learned guides on how to cope with the responsibility as a parent, obligations in the community, importance of cooperation and participation, gist of volunteerism, and gained leadership skills. 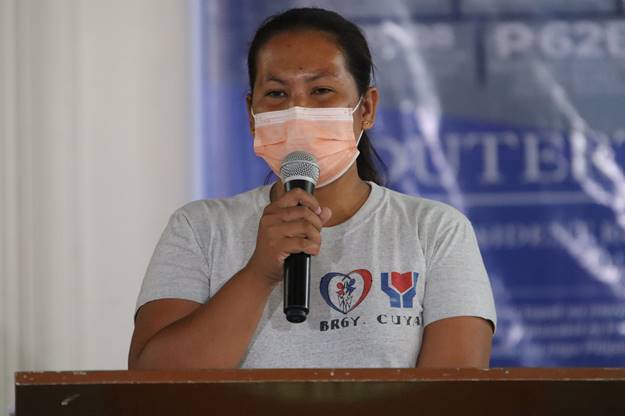 Isidra Donghil sharing how her family's life started to get better when they became beneficiaries of the Pantawid Pamilyang Pilipino Program. (PIA Bohol)
Delete

"I became a 4Ps parent leader, and since I like teaching, I soon served as the barangay Day Care worker," she said.

In 2018, when a new president was elected, she began to worry as rumors have surfaced that the new administration is going to cut off the 4Ps. “If that happens, how do we manage to continue sending the kids to school? We know that my husband’s income is barely enough for our daily needs, so I began to worry," she shared.

After weeks and months, they noticed that the program was enhanced even more. “We were so happy when we heard the news that the new president, President Rodrigo Roa Duterte, has signed the law that institutionalized the 4Ps,” she said, her voice still carrying that excitement she must have felt five years ago.

After the cash grants came the monthly Rice Subsidy to make sure every 4Ps family can buy rice. “There was an increase in the cash grant, and then we, for the first time, got hold of cash cards that we no longer have to take the queue to claim our benefits,” she said.

“Beyond the 4Ps, we started to feel the government programs that truly helped us make our lives easier: there was the Unconditional Cash Transfer, which included 3Ps members. Then we learned that as indigents, we were automatic Philhealth members and could avail of the zero billing policy in government hospitals,” she said, enumerating her benefits.

With these, she thanked God for guiding the government under the Duterte Administration to help the poor.

When the threat of the coronavirus disease came in 2020, life for the Donghil family again was again put to the test. “We could not go fishing anymore due to the community quarantine restrictions. We thought we would slide back to our past, but then, the government was there to help the poor like us.”

First, there was the Social Amelioration Program, of which the Donghil family was included in the list of recipients of the financial assistance. This was a great help as they were able to buy food, hygiene kits like face masks, bath soap, and other needs.

As a way of paying back, Donghil also offered herself as a volunteer in surveying family needs and giving out food packs and relief goods from the local government.

Months later, continuing its package of assistance to the poor, the government under the Duterte Administration through the Department of Social Welfare and Development, handed out financial assistance in the form of livelihood capital for the pandemic-affected families.

“Our family was among the beneficiaries, I continued on the small business we had in barbecue stand and grill while selling siakoy. This was a huge help for our daily needs with the pandemic, adding items to our daily costs,” Isidra said.

It was also this administration that decided right away to respond to the pandemic by giving free vaccines, which placed the members of the 4Ps and indigents in the priority list. “I urge everyone who have not received the vaccine yet, to be there, as our chance of giving back to the government what it has been doing for us,” Isidra added.

“As I stand before you today, I am truly thankful to President Duterte for the better life we feel in the government’s pouring of help. I may not have reached success yet, but I trust in God that he would guide us to be models of the community in helping others get past whatever is holding them from betting out of poverty,” she said.

Isidra's testimonial for the Duterte Legacy Caravan in ten Bohol towns is a similar tune to the thousands of Filipinos who have felt an alleviation from the harder life they had in the past. (RAHC/PIA7 Bohol) 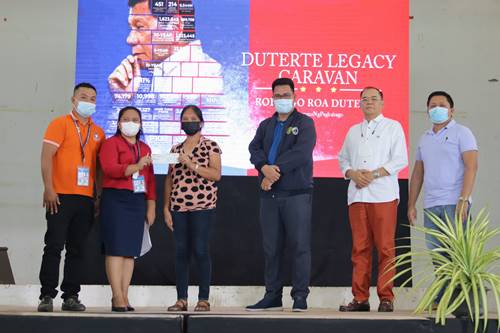 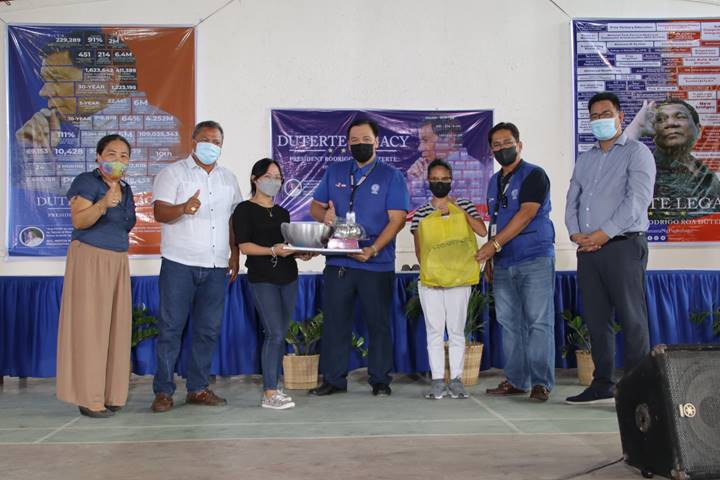