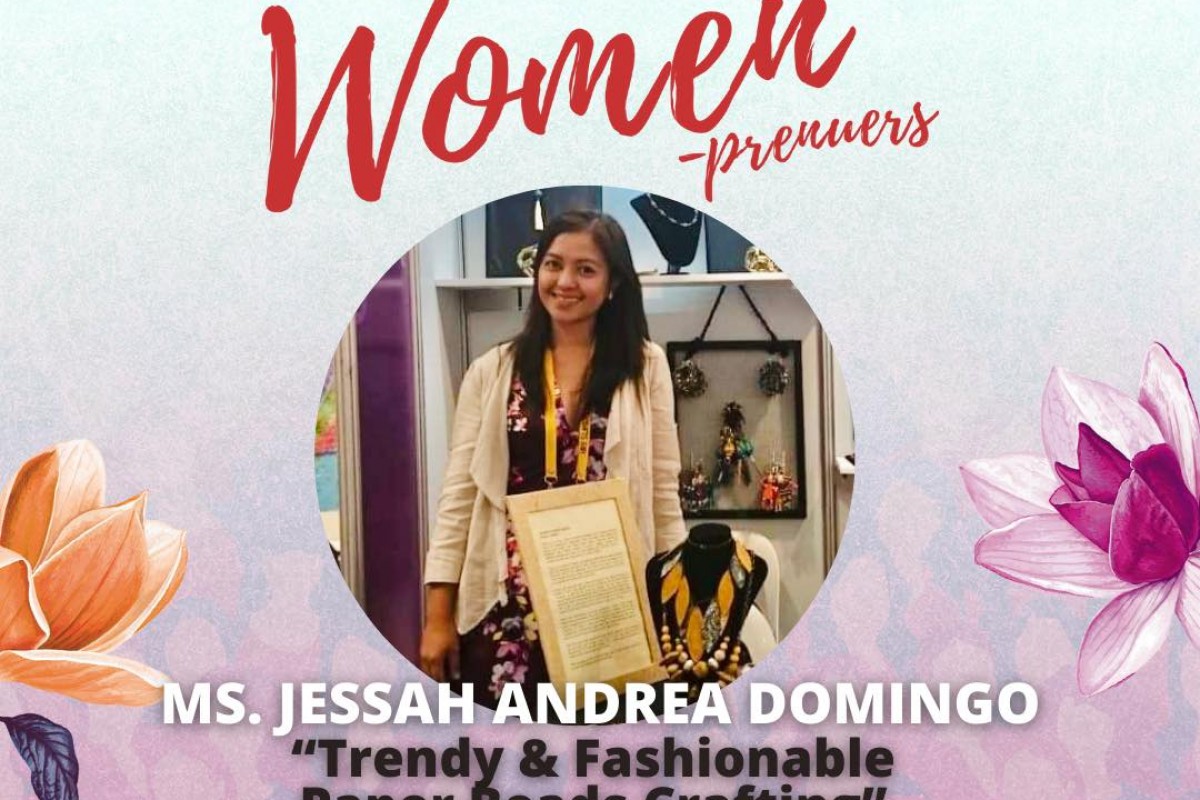 This young entrepreneur in the town of Quezon in Isabela province turned her passion in paper beads-making into the world of fashion, with her small business ever flourishing today.

At 32, Jessah Andrea R. Domingo, has already made an impact as local entrepreneur after she successfully introduced the stylish bodily ornaments and home decorations out from paper scraps. She inherited her business acumen skills from her mother.

“I was inspired by how my mother was making an income from producing and selling processed fruits and vegetables just to provide for the family,” Jessah recalled.

It is not surprising that at an early age, Jessah engaged in small business ventures like selling variety of food dishes during her elementary days.

“My mother, then, was the President of the Barucboc Women’s Organization and was the RIC Federation President of the town. She always encouraged her fellow members to allot time to make income in their homes so that they have something to sell,” she narrated.

When she was a student in high school, she drew inspiration from a TV program about arts and crafts, particularly on paper maché. She tried it just out of curiosity at first, but as time went on, her creative hobby became a passion and later, a mode of earning.

She continued making paper beads in college and then innovated further the designs of her craft.

“When I graduated in college with a degree in Hotel and Restaurant Management, I worked for a while as a Jollibee crew member, and still, during my vacant time, managed to make paper beads” Jessah recounted.

She also experienced working as real estate consultant and a full-time employee, and still continuously followed her passion during her free time. However, she later left her full-time job.

In 2011, she had a medical operation involving an ovarian cyst. Her time recuperating saw the development of her craft and the birth of several new designs of her products.

Among the paper bead products that she is producing are chic bracelets, necklaces, earrings, among others, which she sells online and in various trade fairs.

According to Jessah, since her small business started sometime in 2014, there are now almost 70 women and youth in Barucboc, who have worked in her paper beads crafting while earning a wage.

“Today, I have four permanent women workers who are helping me in producing paper bead ornaments, and when there are bulk of orders, I seek the help of other women and youth in our community and pay them,” she said.

Jessah participated in various trade fairs initiated by the Department of Trade and Industry (DTI). She also engaged in business, marketing, and product promotion when there are celebrations or festivals across Isabela and nearby provinces.

“It is inspiring that people appreciate my products. Thus, I am more eager to continue and develop my craft,” she added.

Jessah has already experienced joining both national and international trade fairs, which also strengthened her desire to continue her business. She had the opportunity to supply paper bead products for Pandayan, a known department store chain, through the DTI’s buyer-seller match up program.

The Covid-19 pandemic did not stop Jessah in creating and marketing her products, although she admitted that the demand slowed down due to the limited movement of people.

When movement restrictions were imposed in the country, she opened an online selling or marketing platform on the internet, and thereafter, orders for her products came in from various parts of Isabela and even outside the province.

“We did not stop producing and selling our paper beads products in this time of the pandemic. We continued selling using our page, Andrea’s Paper Beads Online Shop, and now, we are joining trade fairs while following the minimum health protocols of the government,” Jessah said.

At present, Jessah is joining the trade fairs organized by the DTI Isabela at Robinsons Place in Santiago City and in City Mall in Tuguegarao City. Her store is continuously receiving orders from clients.

Women have many challenges in life not just in running business, for example, mainly in supporting their families as well.

She believes that women have strong will power in overcoming such challenges. Women never stop moving on. Her craft is already her “partner” and nurturing it is what she loves and is her heart’s desire in life.

For Jessah, nothing is impossible. If you are passionate in doing something, go for it because it could be your edge that could bring you your next big thing. (ALM/MGE/PIA Isabela) 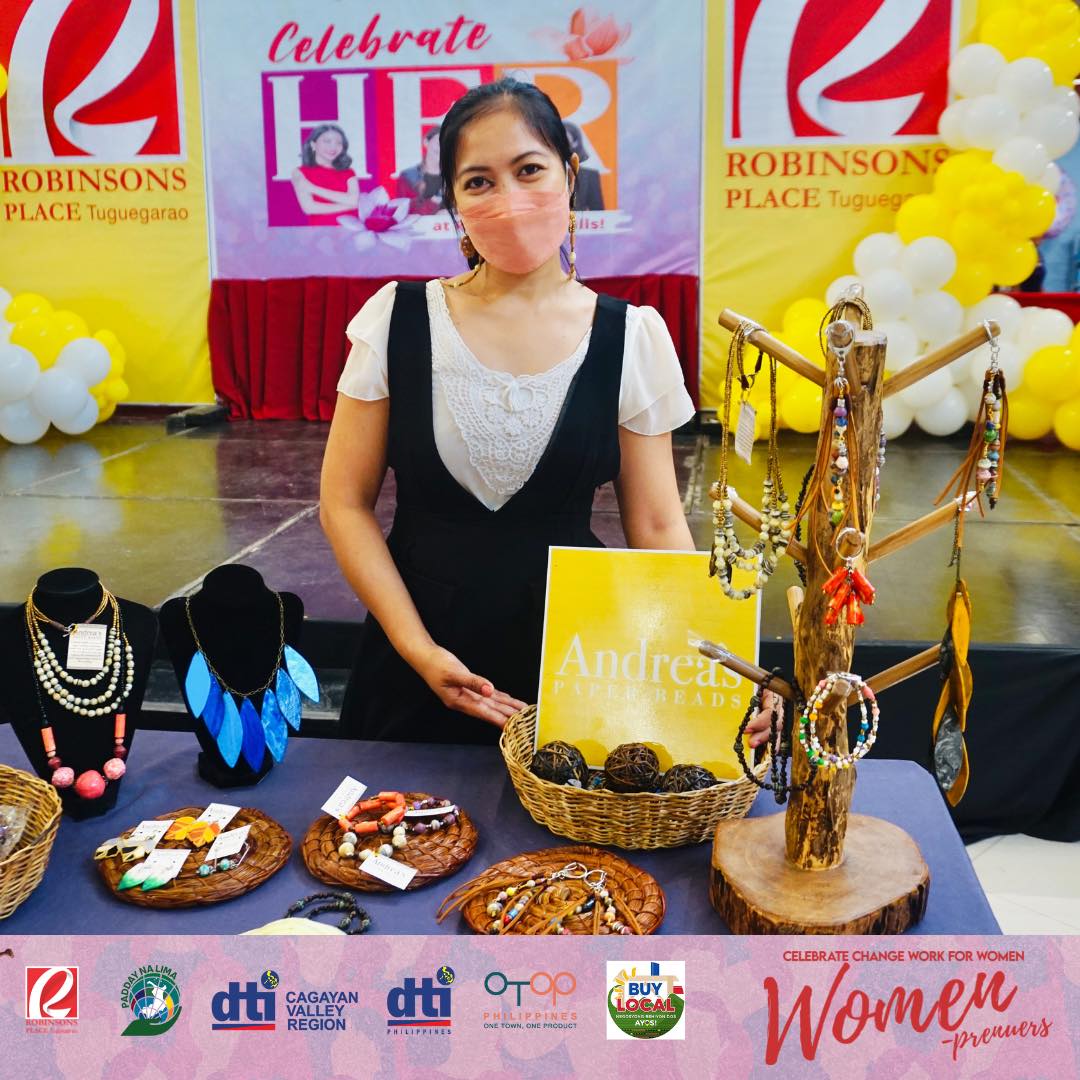