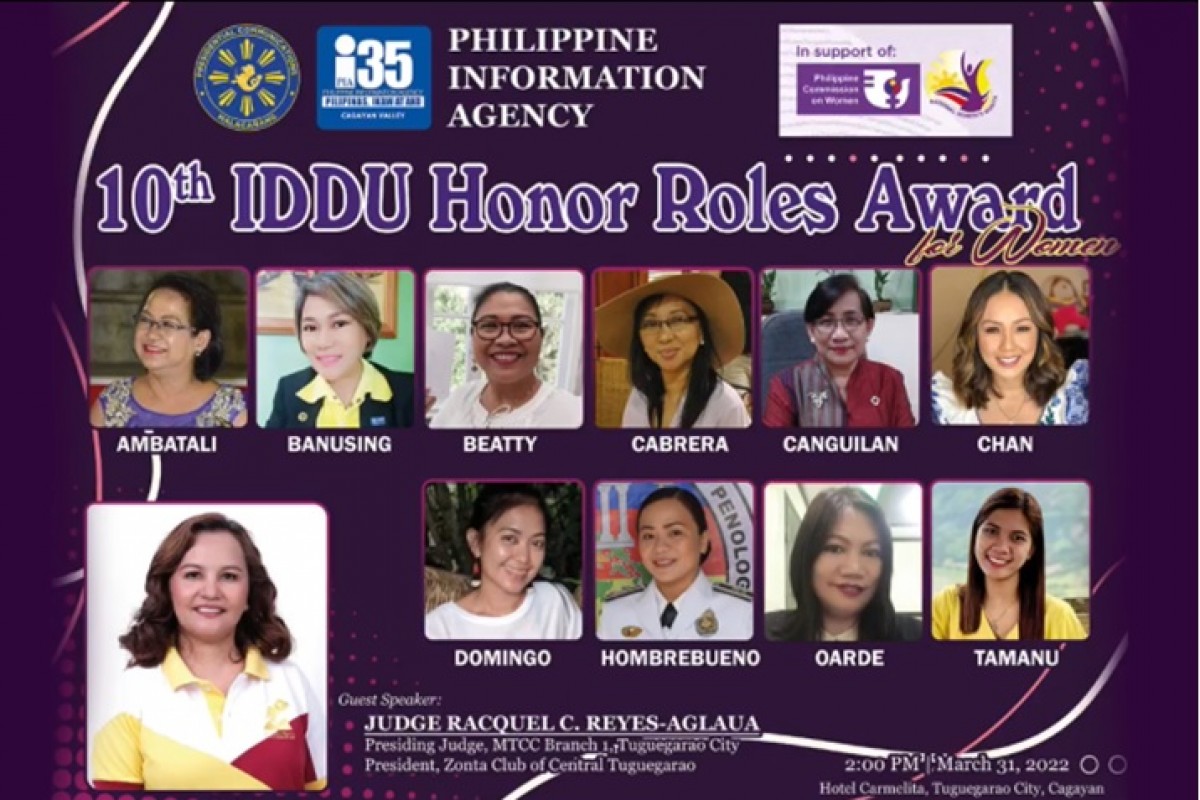 The Iddu Honor Roles Awards for Women in Cagayan Valley was launched in March 2012 out of the need to recognize outstanding women who will serve as inspiration and model to the rest of the women sector of society.

The Philippine Information Agency (PIA), Regional Office No. 2, in Tuguegarao City, Cagayan, then, observed that during the celebration of Women’s Month in the city and elsewhere in the region, seldom is an awarding for outstanding women held, despite the thought that so many women from various disciplines have been excelling and working well in the areas of development and in the advancement of the cause of women.

With the entire staff of then PIA Regional Director Purita S. Licas, women who deserved to be recognized were identified during the women’s month in Tuguegarao City that year. 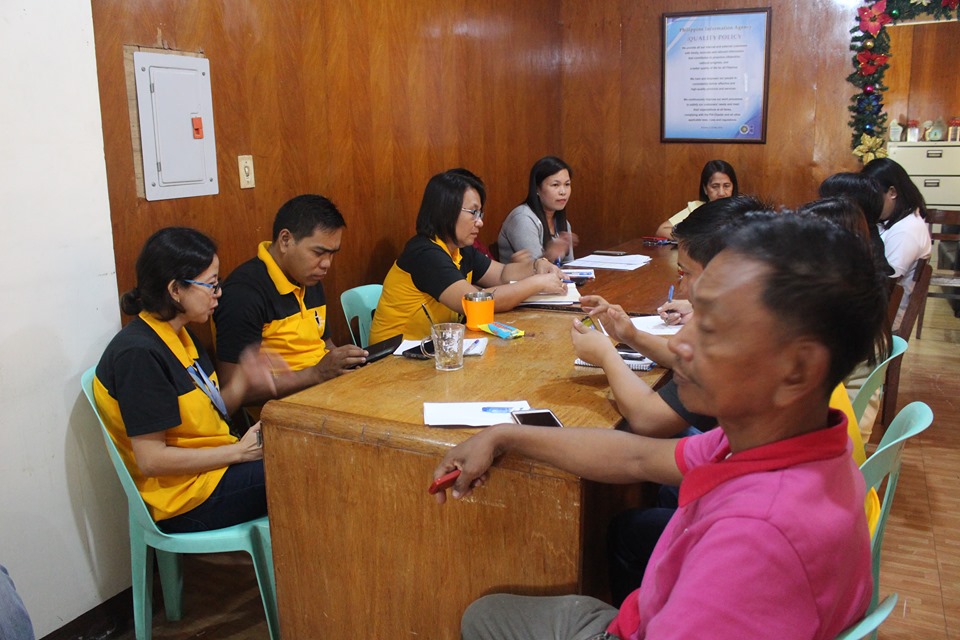 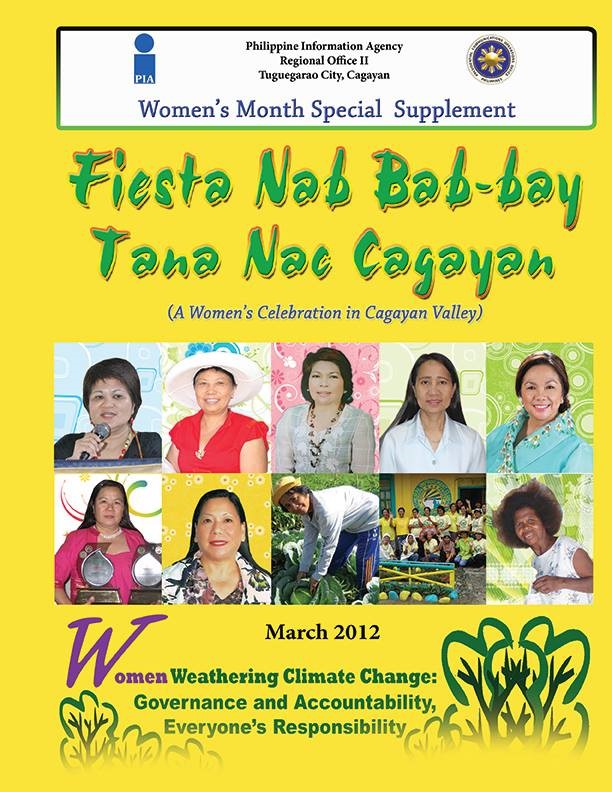 It is a paperless award where no nomination forms to be filled-up nor other forms of documents to be submitted to the agency is required.  Admittedly, the selection is revolutionary in the sense that those selected for recognition are women who may not have been awardees themselves in their respective careers. Others, including a woman-tribal chieftain, are cited for leading their own people towards progress and development.

As long as these women played significant roles in the lives of their fellow women and the society, in general, they deserve to be recognized despite the fact that PIA is not an award-giving body, to say the least. But these woman-awardees have been part of decades-old coverages by the agency. In short, these women grew with PIA and vice-versa.

Ten women from the various fields of endeavor were then selected. They became the pioneer-awardees in 2012. 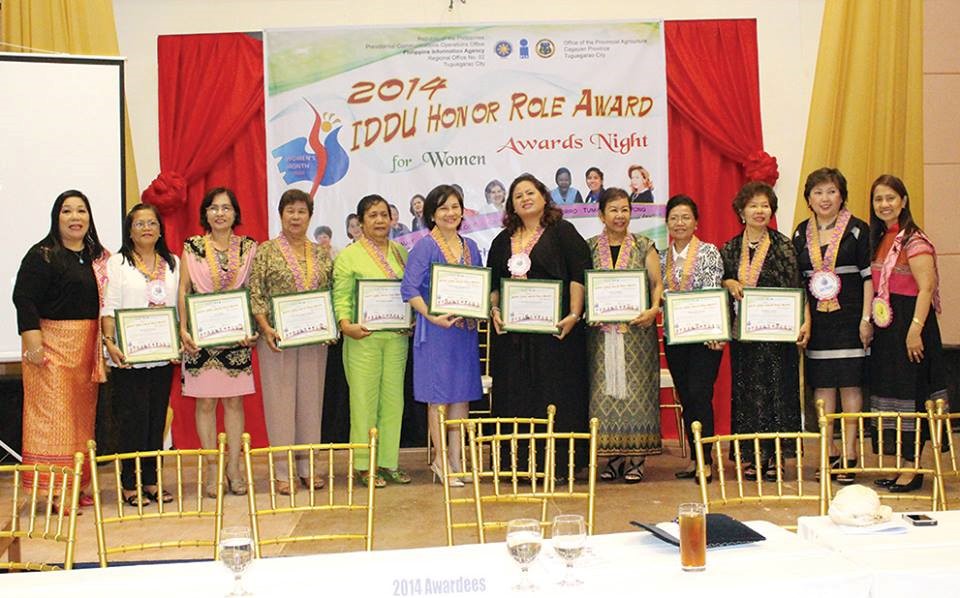 The women were then interviewed for the PIA writing pool to come up with their feature stories and which were compiled for documentation. During the 2012 Women’s Month celebration of the Tuguegarao City Government, the PIA staff simply distributed copies of the 10-page document then.

The positive feedback from the awardees and other people gave encouragement for the PIA to again come up with the said honor awards in the succeeding year 2013. This time, the PIA-2 staff felt the awards had to be given a name to distinguish itself from the rest of the existing awards.

Everyone agreed to use the name “Iddu” which means “loved one or beloved” in the Ibanag language. Likewise, the Ibanag term was used to suggest that the award originated in the Premier Ibanag City of the North, Tuguegarao.

The word ‘rolls’ in the words ‘honor rolls’ was dropped and instead, was changed to ‘roles’ to reflect the roles and accomplishments, and significant contributions of the honorees.

Names of women for consideration in the next recognition year piled up as early as August of 2012, five months after the first batch of identified women-leaders were recognized.

As early as January of 2013, at least 10 names stood out from a long-list which was likewise referred to other sectors for scrutiny.

This time, another unwritten rule was to be followed for an individual to be included: no protest or negative feedback in any form against any of the honorees before the awarding day is to be received by the PIA. Two weeks were allotted to float the names of the would-be awardees through the members of the PIA-based media organization, the Informers’ Club.

An unexpected dramatic twist happened when the Provincial Government of Cagayan, through Provincial Agriculturist Mildred Abella offered, to shoulder the expenses for a formal awarding night held at the Victoria Hotel in Tuguegarao City on March 28, 2013.

Unlike the 2012 awarding, the honorees were surprised to see themselves in the front pages of two local newspapers during the awards night. Not only that, PIA churned in a separate publication similar to what was distributed in 2012.

That night, the Northern Forum and Northern Digest distributed their special supplements to likewise honor the 2013 woman-awardees. Each awardee received a copy of the newspapers where their full-length feature articles were spread.

Former honorees were ecstatic months after the awarding in 2013. The PIA regional office, then, requested the initial awardees to help identify women who have and continue to do their share in the development process and in promoting the advancement of women for further scrutiny by the agency.

Thus, in 2014, under the rural women development projects, the provincial government, once again, supported the awarding ceremonies scheduled at the Valley Hotel in Tuguegarao City on March 27, 2014.

On its 4th year, the search committee decided to strengthen further the grip of women in the countryside, thus, a major change was made in the selection of the awardees. This time, only those who contributed much in the over-all efforts at conservation and protection of the environment in relation to climate change were meticulously identified as 2015 woman-awardees.

On the same occasion, PIA-2 launched the first-ever anthology book for women in the Cagayan Valley region entitled “IDDU Honor Roles for Women, An Anthology” which highlighted the personal accomplishments of awardees since 2012 when the project was started. 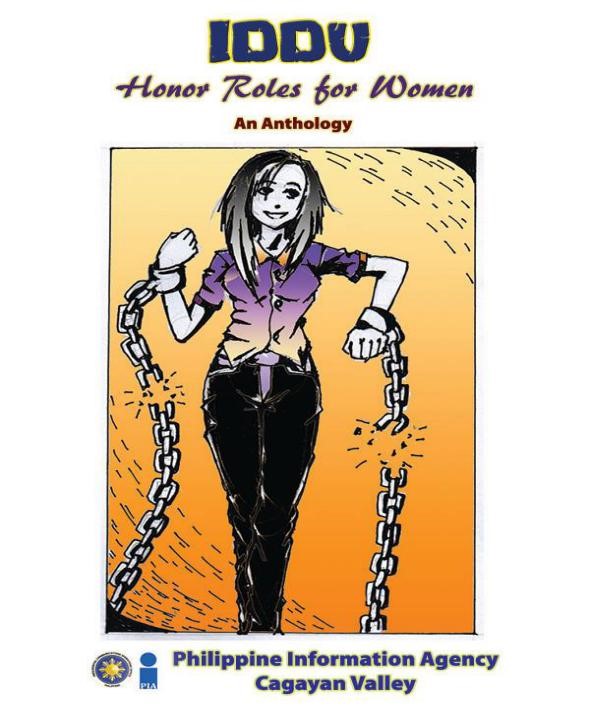 The publication, which cover was designed by Aris Cabang, a student of the Cagayan State University-Carig, is an eight by five and a half inch sized, 92-page colored book. It included a foreword by Director Licas and a message by Secretary Herminio B. Coloma of the Presidential Communications Operations Office, Malacanang.

No less than PIA-Central Office Staff Director Emelyn Q. Libunao of the Project Management Division was the guest of honor and speaker during the awards night and book launching on April 17, 2015 at Casa Angela in Tuguegarao City.

The book serves as a footnote to the continuing journey of the PIA-2 to get out of the box to find ways and means to bring relevant and inspiring information, like the Iddu book, to its target stakeholders in the region. 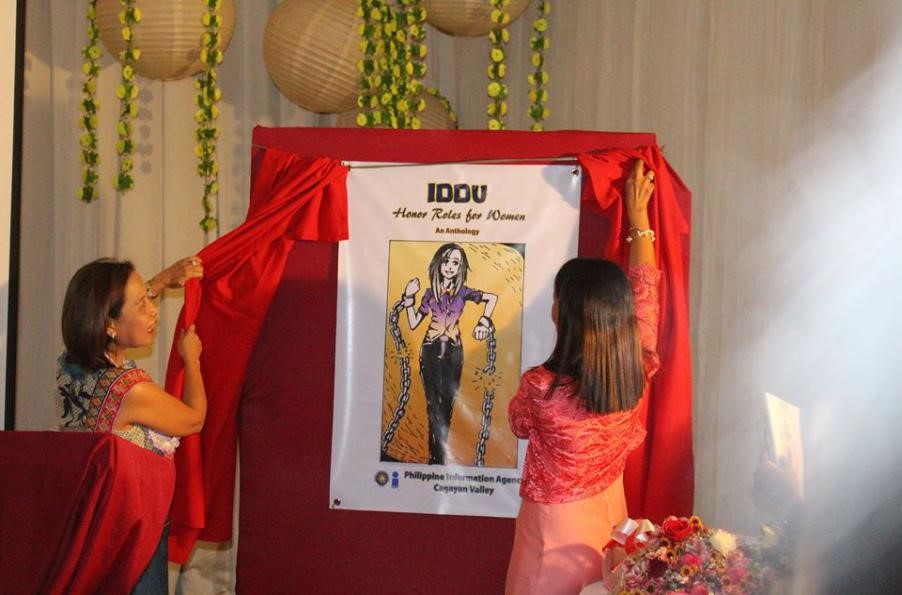 The book is actually an offshoot of articles written by the agency’s pool of writers and which were compiled as documentary on women power. It also serves as a mirror upon which other women out there can emulate as the stories reflected the pains and struggles of women, and eventually, their successes.

With a pioneering project like the Iddu Anthology, PIA hopes that other sectors will now do the same if only to inspire the ordinary Cagayanos during these times of weather uncertainties.

Despite the lack of funding support and resources, the agency took the risk in implementing the project and continue to recognize the “drivers of change” in the region who untiringly volunteered themselves in urban and rural developments especially in times of disaster, conflict, calamity and deprivation.

At present, the award system is still a paperless recognition wherein no nomination form is required to be filled out nor are evaluations conducted to select the finalists. Only interviews are done with the earlier identified nominees, and the leaders and individuals who can vouch for the nominees’ exemplary performances.

The selection body is still composed of PIA-Information Officers, Local Writers and the members of the Informers’ Club, a Cagayan-based media organization, who have worked with the potential woman-awardees and have actually witnessed their achievements and successes.

The only criteria followed strictly are: that the honorees do not have a questionable background in any form and have contributed much to effect change in the lives of the people, particularly women, in their respective communities. 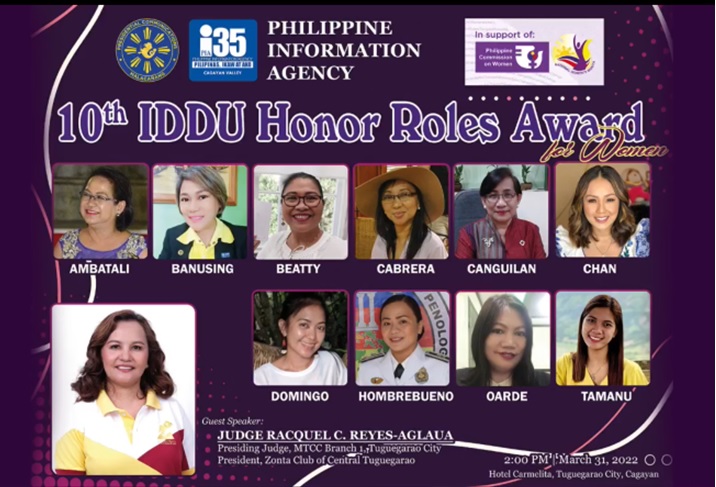 All the woman-awardees are considered selfless in their quest to improve their respective communities. These are the women who never expect awards nor recognitions from any group, yet, went out of their way to do something good and extraordinary.

The positive feedback which continues to come in especially from the awardees and other sectors of society gives the PIA-Regional Office the drive to continue with this notable endeavor.

The award is now on its 10th year in 2021. May the stories of success, and also the 90 other awardees honored in previous years, have become an inspiration to everyone, including men. (ALM/PIA Region 2) 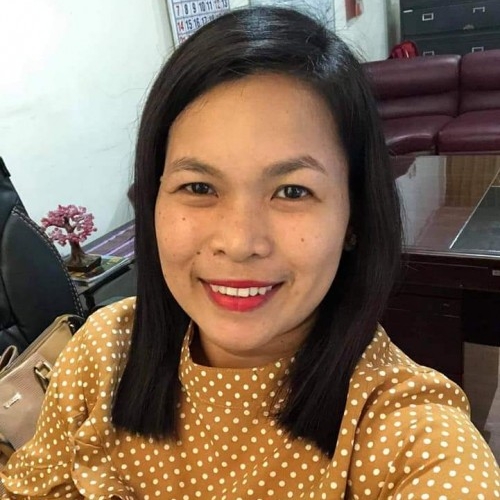