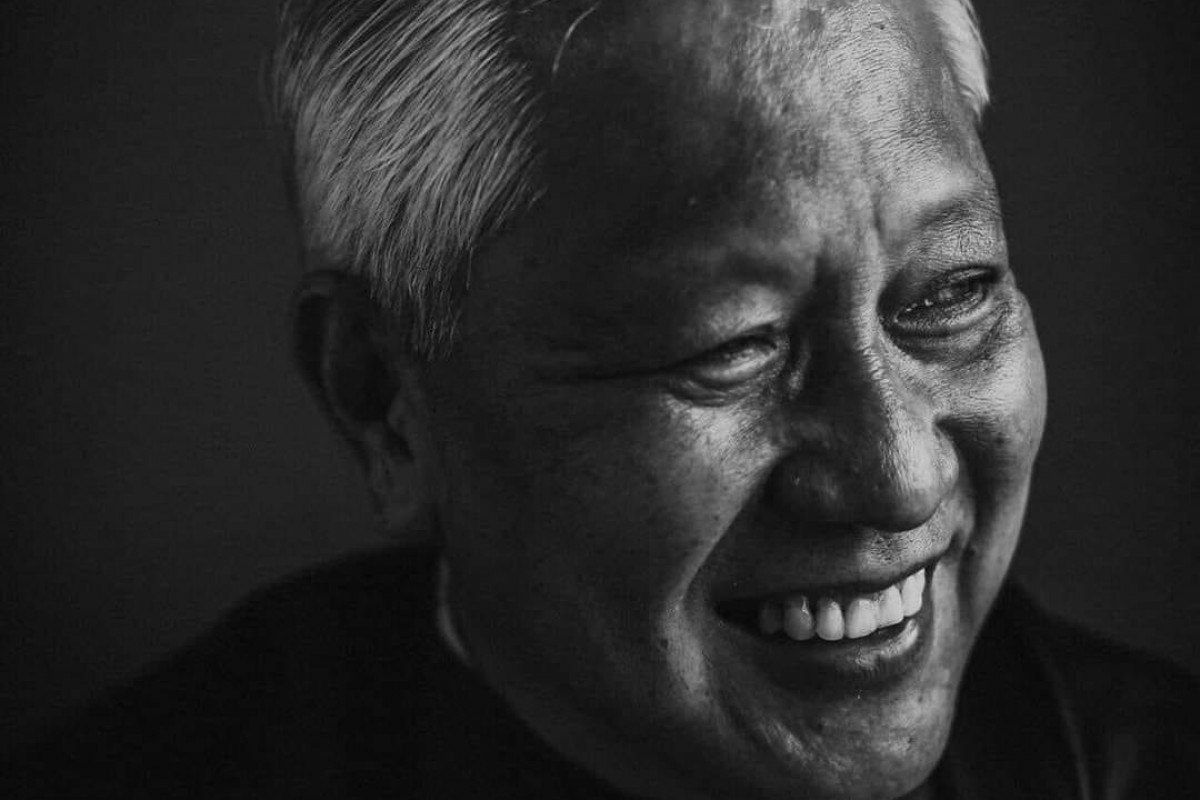 "There are some who bring a light so great to the world that even after they have gone, the light remains,”- an adage befitting a man that NICOLAS BEDA PRIELA was.

Sir Beda, as he was fondly known by friends and colleagues, served as a light to everyone whose life he has touched, in various beautiful ways.

He was born on June 1, 1953 in the town of Nabua, Camarines Sur, to the late Atty. Nicolas O. Priela, a native of the same town and the late Patrocinio Armada Priela of Janiuay, Iloilo.

Beda left his loved ones at the age of 69.

A man of strong commitment, Sir Beda dedicated his life to creating significant changes in the society that he calls his second “home,” be it in the academe, in religious organizations, in various government posts he served, and in almost all facets of his human existence.

He unselfishly gave his time, and wisdom and poured his heart into whatever tasks he sets his heart to accomplish. It is not surprising then, that he has handled prominent positions in various public and private offices and highly-esteemed organizations during his heydays, up to the time of his passing. 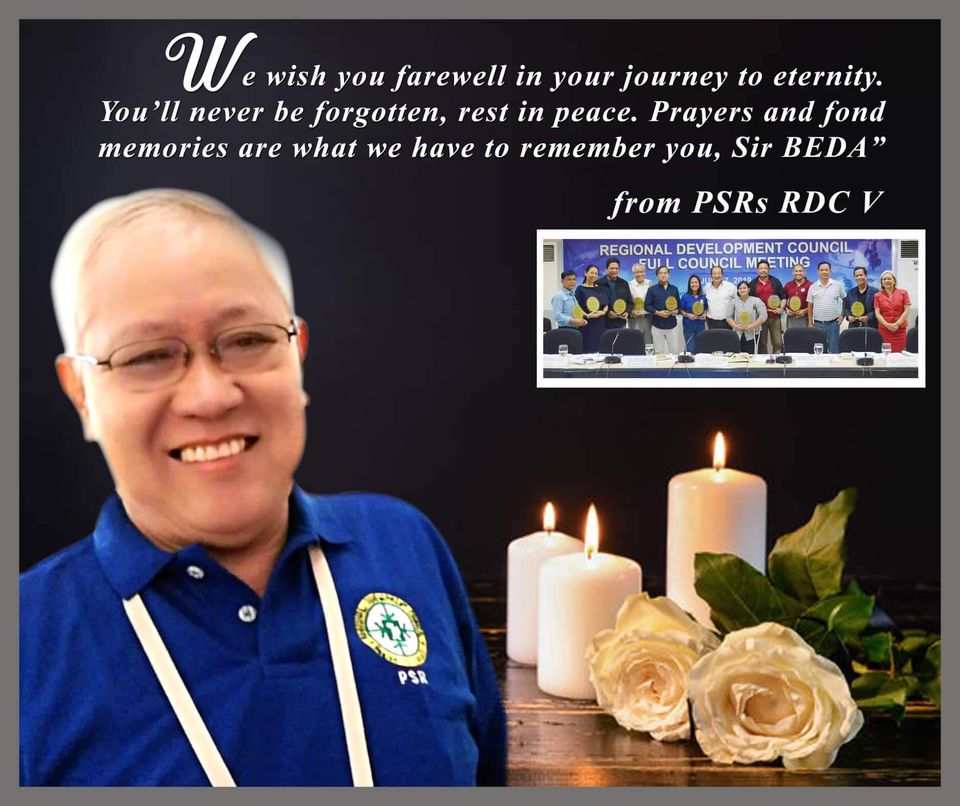 His life in Public Service

Beda was the current co-chairman of the Bicol Regional Development Council (RDC). He ardently pushed for economic and social change and dreamt of giving the “not-so-privileged” communities equal access to the liberties that other people also enjoy. He believes that every person can contribute, no matter how little, to the progress of society.

Since August 2014, he was an active member of the 9th Infantry Division (9ID) and served as the Chairperson of the MultiSectoral Advisory Board’s (MSAB) Review and Assessment Committee. He passionately shared his ideas on how to win the war against elusive peace and suggested ways to improve the relationship between the government and those who adamantly wage war against it.

As an economist, Beda shared his thoughts regarding the utilization of resources, and management of people thru participatory governance as he handled various government posts during the early part of his professional career.

From June 1997 to December 2004, he was the Provincial Chairman of the Technical Education and Skills Development Authority (TESDA) Committee in Camarines Sur and was a member of TESDA Region V Committee in January 2005.

He served as Research Assistant of the UPLB Technical Assistance Group to the Bicol River Basin Development Council (BRBDC) from April 1975 to May 1976 and as Agricultural Economist at the Bicol River Basin Development Program Office (BRBDP) from June 1976 to October 1979. He was BRBDP’s Project Planning Specialist from November 1979 to September 1987 and Asst. Chief Projects Development Coordinator under the Program Management Information and Evaluation Division. 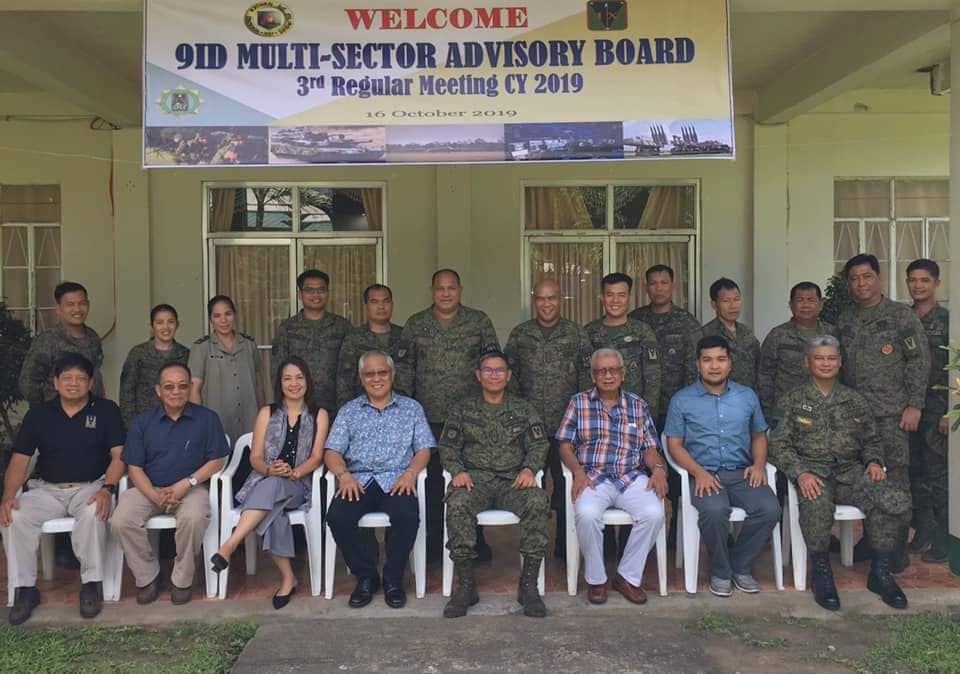 Since 2014, Nicolas Beda Priela actively attended every conference and significant activities of the 9ID as one o the Multisectoral Advisory Board (MSAB_) member. He heads the Review and Assessment Committee.
Delete

After serving the government, Beda hopped from one private office to another, sharing his brilliant ideas as he quenched his thirst for development: Lisam Enterprises General Manager from January 1996 to April 2006; Director IV (Technical Assistant / Consultant) to the Office of Presidential Assistant Manuel Andal in Malacanang from Oct. 2006 to June 2010; Philippine National Railways (PNR) Chief of Staff - Office of the General Manager from Oct. 2008 to Sept. 2010 and as Consultant at the same office from Sept. 2010 to Dec. 2011.

He worked as Partnership Adviser in the Local Governance Support Program for Local Economic Development (LGSP-LED) to the Metro Naga Development Council (MNDC) from July 2011 to March 2014. 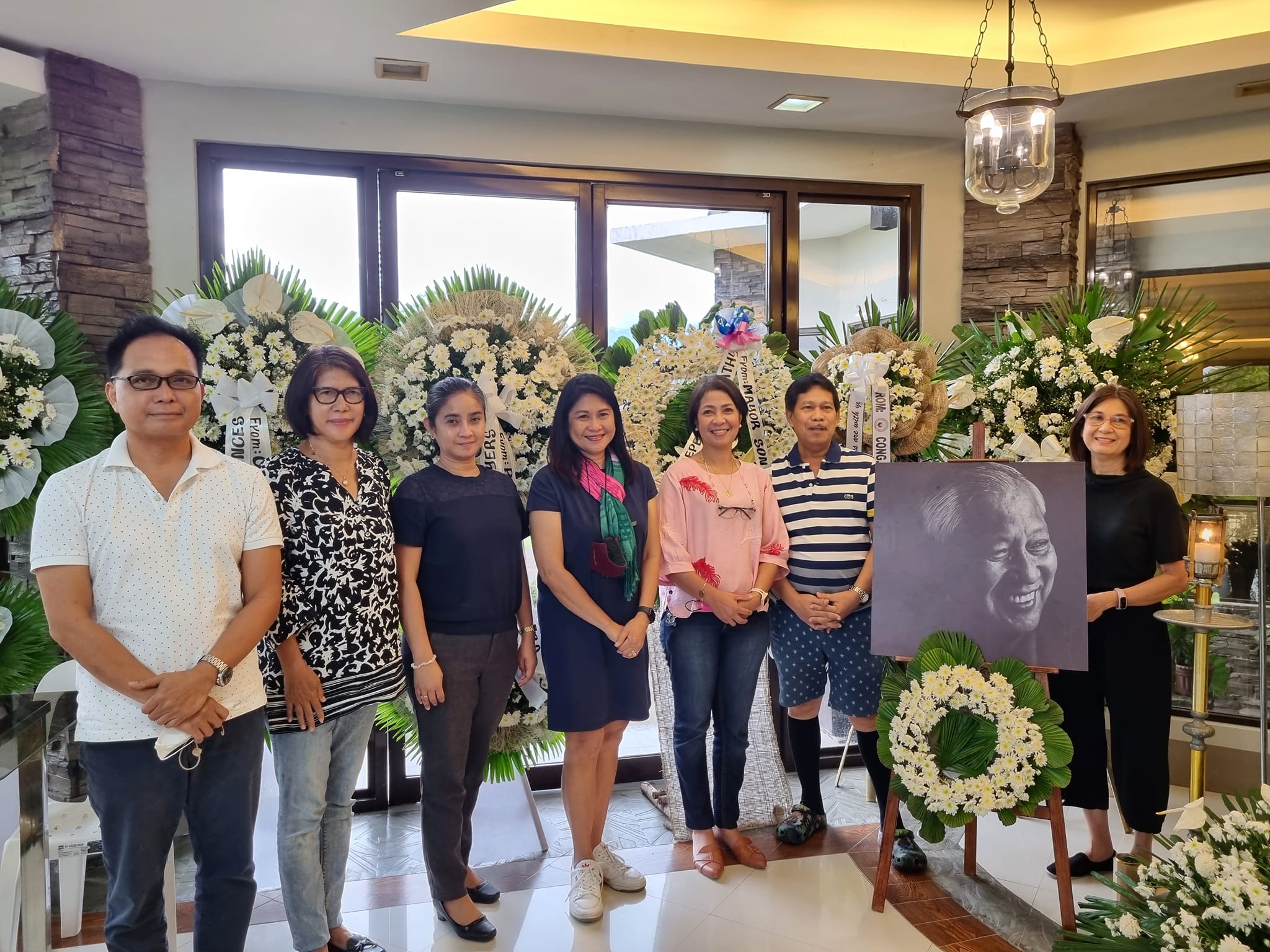 He actively participated in various civic and religious organizations.

A Lover of Learning

As a lover of learning and studying, Beda always seeks knowledge and satisfies his intellectual curiosity by pursuing a higher level of education.

After finishing his elementary education at Naga Central School in 1965, he pursued his secondary education at the Ateneo de Naga University and graduated in 1969. He earned a Bachelor of Science degree from the University of the Philippines-Los Baños (UPLB) in 1975 where he majored in Agricultural Economics. He also received his Master of Professional Studies degree in Food and Nutrition Planning from the same university in 1985.

He attended Post-Graduate Training at the University of Manchester, United Kingdom from September 1987 to September 1988.

His love for education also led him to the various universities in Camarines Sur.

He was Ateneo de Naga’s Professor from June 1977 to October 1982 and worked as a part-time Graduate School and College Faculty from June 2016 to 2011. He was also the Chairman of the Board of Directors of the Ateneo De Naga Community Development Foundation, Inc., from March 1999 to 2007.

From Oct 2006 to 2010, he worked at the Graduate School and College Faculty at the University of Nueva Caceres as a part-time professor. He was one of the Board of Trustees as a Private Sector representative at the Camarines Sur Polytechnic College (CSPC) in August 2014. He was part of the Search Committee in the selection of the 5th Naga College Foundation (NCF) president in January 2015.

A Man of Great Faith

For Beda, a meaningful life was to serve others.

“We remember before our God and Father your work produced by faith, your labor prompted by love, and your endurance inspired by hope in our Lord Jesus Christ (1 Thessalonians 1:3 NIV).”

From May 2003 to December 2006, he was the Project Director of Gawad Kalinga (GK) Trianggulo, in Naga City. He is unyielding in his belief that a caring and sharing community still exists and that every family should have a roof over their head, regardless of their social status in life.

His weekend is not complete without the Caceres Commission on Communications (CCCom) Sunday’s “Manindugan” radio program over RMN-DWNX as co-anchor of Mina Bermudo. Beda began co-hosting Manindugan in January 2007, up until his last episode on April 24, this year. 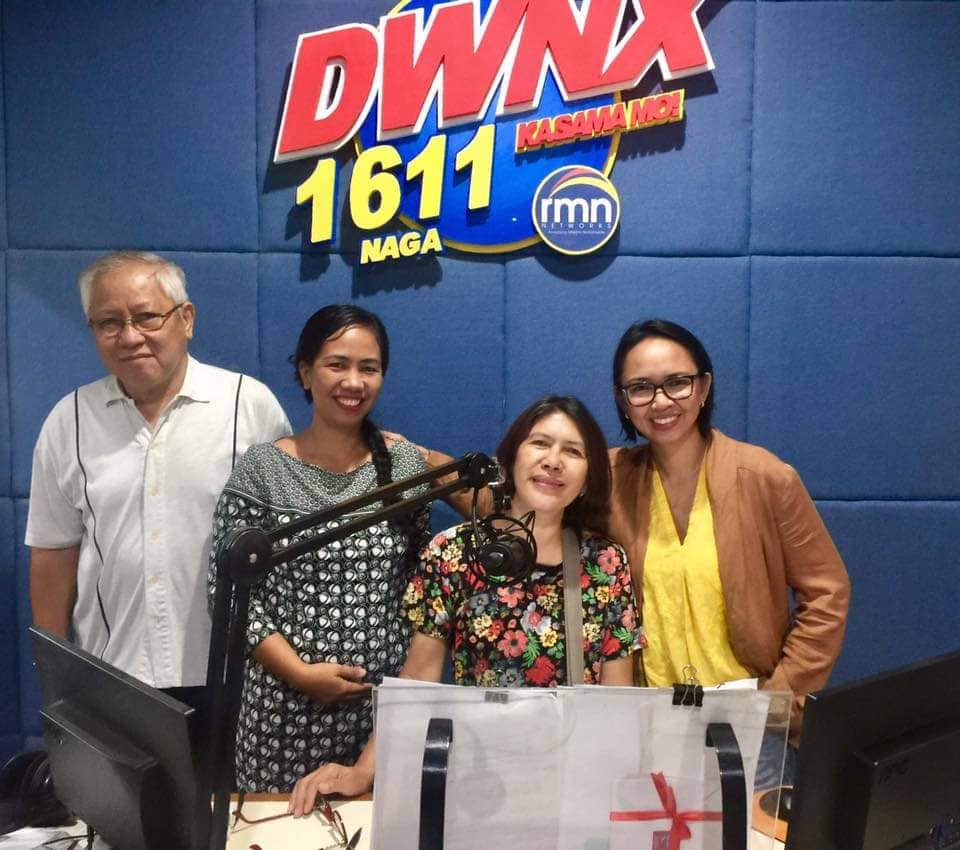 Nicolas Beda co-hosts DWRN NX's Sunday program "Manindugan" with Ms. Mina Bermudo of the Caceres Commission on Communications (CCCom). Despite feeling the progression of his illness, Beda had his last radio program via telephone last April 24, 2022 just to share his insights to the program's avid listeners for the last time. (Photo credits: MBermudo)
Delete

Beda reaped what he sowed and received notable awards in acknowledgment of his meritorious deeds. He received commendation as Outstanding BRBDP Manager during the 10th anniversary of BRBDP in May 1983.

He was also a recipient of the resolution of Commendation from the Sangguniang Panlalawigan of Zambales thru Resolution No. 89-226 in recognition of his remarkable contribution as DTI-Zambales Provincial Director on October 16, 1989.

Beda received a Special Mayoral Citation from the City Government of Naga on June 18, 2012, for his commendable work ethic and great contribution to the progress of the city. In April 2022, he bagged the Golden Usa awards from the Boy Scouts of the Philippines. 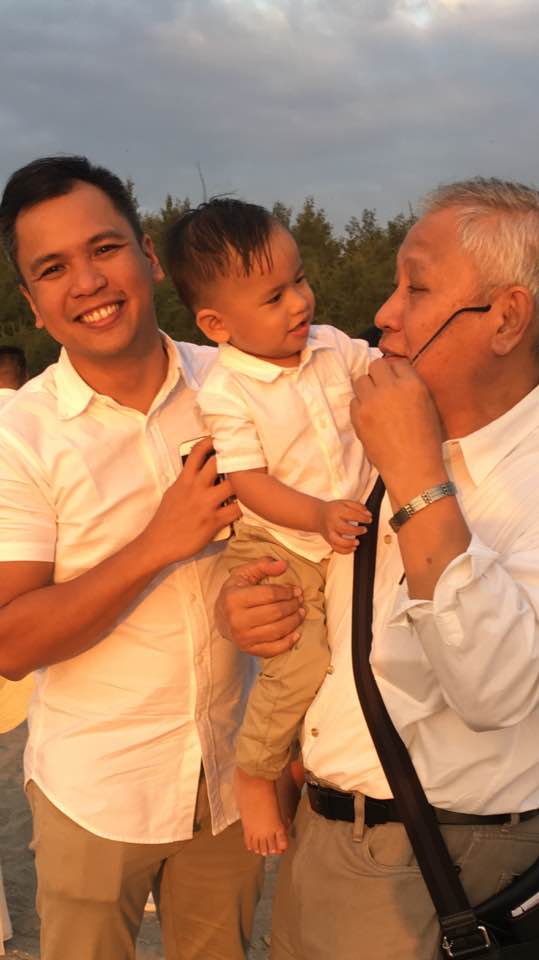 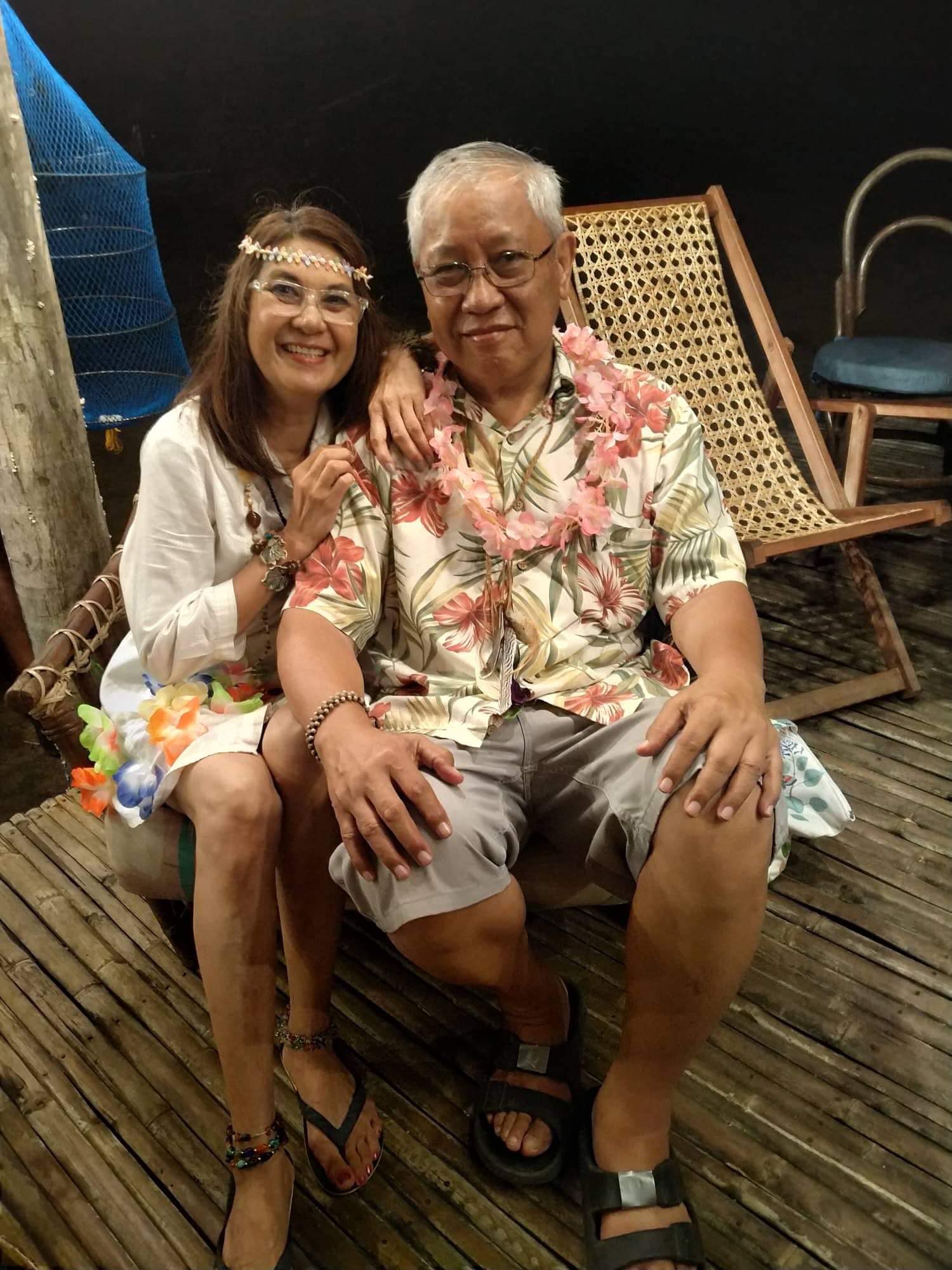 Indeed, it was a life well-lived.

Beda may be gone, but surely not forgotten.

For his wife, Marilyn Peña Priela, he will remain as a loving husband. For his children - daughters Claudine Priela - Alcantara and Adam Alcantara, and son Gian Paolo Priela & Rochelle O. Priela, he will stay as a supportive father and a doting Lolo to his grandchildren Francesca Isabella O. Priela & Paco Manolo O. Priela.

For his co-workers and colleagues, he will always be remembered as a great mentor, a passionate associate, and a dear friend. Beda never truly left for he will remain alive in the hearts of those who shared his journey.

"Only goodness and kindness follow me all the days of my life; And I shall dwell in the house of the Lord forever." (Psalm 23:6)