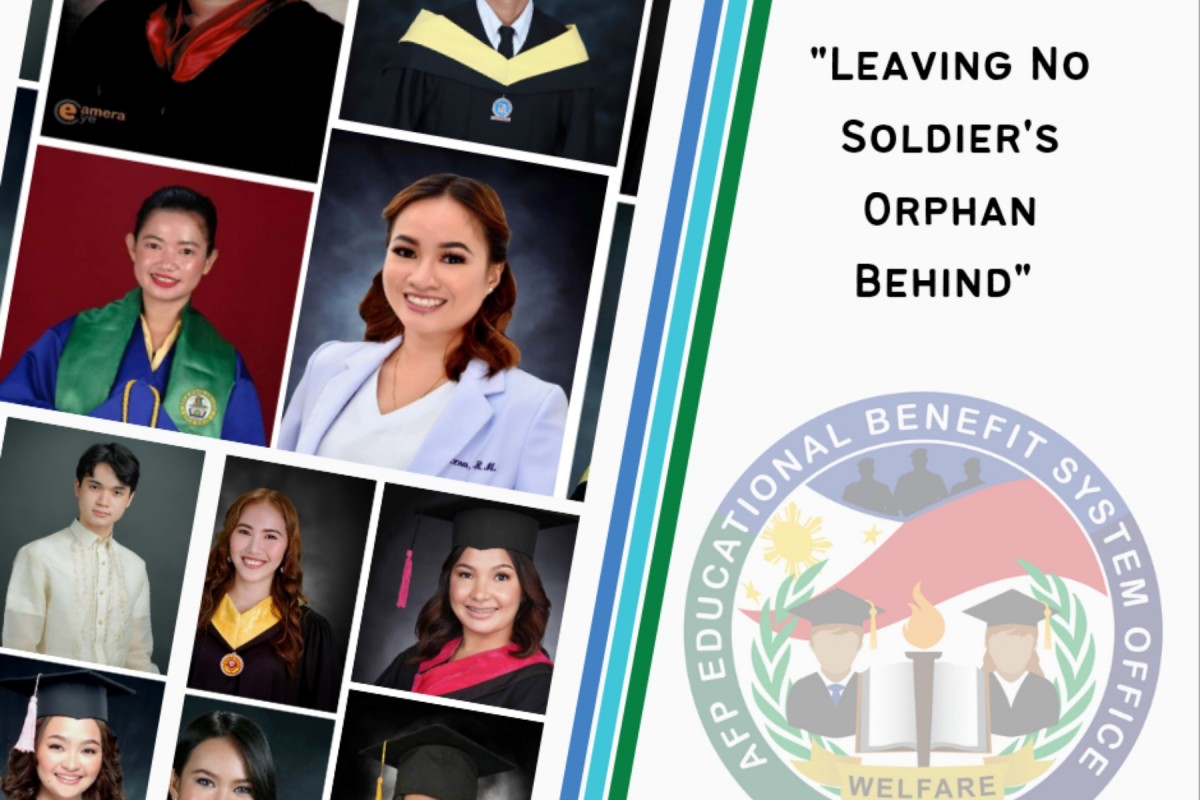 The Armed Forces of the Philippines Educational Benefit System (AFPEBS) reported an estimated total of 5,000 graduates from S.Y. 2000-2021 and more than 3,000 continuing grantees for 2022, who are mostly dependents of killed-in-action military personnel.

Some grantees also opted to join military service to follow in the footsteps of their loved ones who gave their lives protecting the peace and stability of the country.

Established in 2000, the AFP Educational Benefit System (AFPEBS) is primarily tasked to manage the provision of Educational Benefit Programs for military personnel and their dependents. Aside from the law-mandated programs such as the Republic Act 6963 and Presidential Decree 577 to assist the dependents of uniformed personnel in their educational needs, the AFPEBS partners with several schools, universities, and institutions across the country to provide scholarship slots, discounts, and sponsor financial assistance for military dependents.

With an average of 200 soldiers sacrificing their lives in the performance of their duties, the AFPEBS remains committed to its mission to provide responsive educational benefits to enhance the morale and welfare of our gallant soldiers.

As of date, 3,506 grantees are being assisted by the AFPEBS. The grantees are mostly dependents of military personnel from the Philippine Army, Philippine Air Force, and Philippine Navy who were Killed-in-Action, Died in the Line of Duty, or were Discharged due to Disability. Leaving the futures of their families uncertain, fallen Filipino soldiers can still leave a lasting legacy with the AFPEBS and its almost 300 partner schools and institutions supporting the noble cause of transforming the lives of soldiers’ orphans through education.

Leaving No Soldier's Orphan Behind

Spawned from the famous phrase "Leave No Man Behind," the mission to “leave no soldier's orphan behind” has been the long-term commitment of the AFPEBS which became more challenging during the height of the pandemic.

Through the initiative of the AFPEBS-Morale, Welfare, and Recreational Facilities and Other Business-like Instrumentalities (MWRFOBI) Committee, headed by The Deputy Chief of Staff, AFP, the AFPEBS was able to extend assistance to the thousands of grantees nationwide including in their search for employment. With 5,446 graduates from all educational levels, AFPEBS also aims to produce grantees who will become responsible citizens contributing to nation-building. Upon graduating with their chosen courses, grantees also share their messages of gratitude to the AFP leadership.

"Hindi po namin maa-achieve kung anuman ang na-attain naming success ngayon kung hindi kayo naging parte ng paglalakbay naming 'to (We would not be able to achieve the success that we have right now if you [AFP] had not been part of our journey),” shared the daughters of the late S2BM Ruben Decena PN who was killed in action in 1997. S2BM Decena's daughters, Rushelle and Ruisheiben, who graduated in 2019, are now Doctor of Dental Medicine and Registered Electronics and Communication Engineer respectively. The AFPEBS also congratulates all AFPEBS Grantees who have successfully finished their studies and wishes them well in their next endeavors.

The stories that the grantees share about their journey towards finishing their studies serve as a motivation to the men and women of AFP to lend their hearts and hands to help their fallen comrades’ dependents. The same goes for benevolent donors, sponsors, and partners of the AFP in providing educational support to these grantees.

The generosity of these institutions and organizations leaves a mark that goes beyond their respective works. The success stories of the grantees are testimonies that drive AFPEBS to pursue its commitment despite the growing educational demands and need for resources. But with the support of AFPEBS stakeholders which share the same vision in providing educational assistance to the families of our soldiers, AFPEBS can continue to be true to its byword – “Leaving No Soldier's Orphan Behind." (AFP/PIA-NCR)