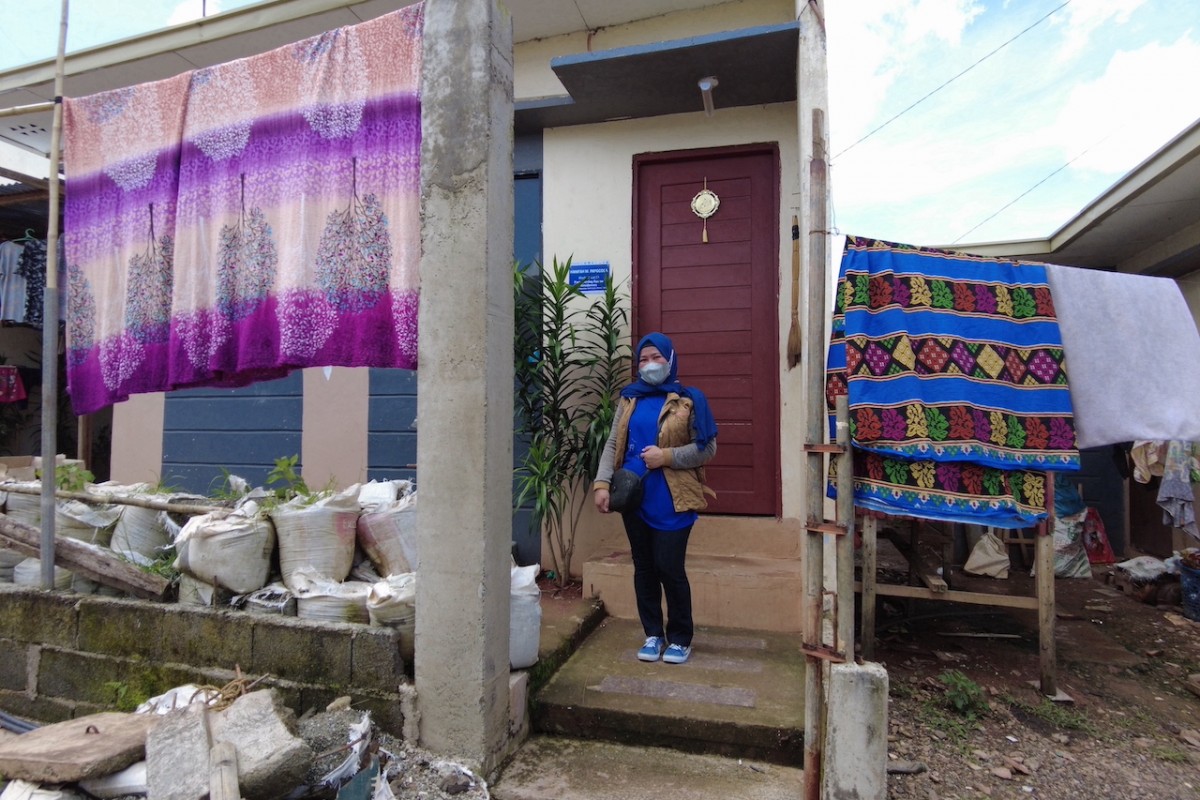 Hanifah Pangcoga and her family went through hell and back to get to where they are now. From run-ins with the ISIS-affiliated Maute group to having an apartment explode right above them, she went from place to place trying to rebuild her life from scratch only to end up at a dead end after dead end.

When the first gun went off, Hanifah went to find her husband in Perez only to find that he had closed their barber shop and went to check on his parents in barangay Calocan. She could hear the gunfire intensifying as the terrorists made their way to the city jail but fought against her better judgment and returned home. Rumors were already going around that they were capturing eligible men and forcing them to join their ranks but all rational thought and regard for her own safety flew over her head as she thought about her three children back home with her sickly mother.

Thankfully her older brother was with them at the time and once they were reunited, the family - minus her husband who was with his own parents - wasted no time in evacuating. Unfortunately, because they were right in the middle of the firefight, they were forced to hide in the underground basement of the White Mosque in Lumbaca Madaya for six days without electricity.

When former president Rodrigo Duterte declared martial law on Mindanao, a member of the terrorist group came down to their hiding spot and told them to evacuate while they still could because it was only a matter of time before Marawi gets bombed.

Fearing for their lives, the family crawled out of their hiding spot and made their way to the Bato Mosque in Dansalan where they decided to stay while they fasted. The siege had tragically occurred during Ramadan. Upon realizing that they had nothing to cook on, her brother suggested that they (he and Hanifah) go and try to look for one but once they stepped foot outside, they encountered members of the Maute group and to their absolute horror, they were taken aboard their vehicle.

Their families were called.

Hanifah’s husband was furious, his fear for his family transforming into a rage as they negotiated over the phone. Luckily for them, one of the members turned out to know her brother - an acquaintance of his apparently - and let them go but not before sternly telling them that Marawi was no longer safe and that they needed to evacuate now. The siblings attempted to hide in an abandoned building but before they could even so much as heave a sigh of relief at narrowly escaping death, the apartment above them exploded and once again, they were forced to run.

Neither of them was fatally injured, thankfully, but it was then that the realization of just how unsafe it was to remain in the city finally sank in. Once they reunited with their mother and Hanifah’s children, it was decided that the best option for their safety and survival was to leave Marawi - at least until everything boiled over.

As they made their way to the borders, they had to carry a plastic stool. Because of her age and declining health - specifically her asthma - their mother could not go very long without having to sit and catch her breath. They reunited with her husband along the way and picked up another aging stranger who was also struggling to evacuate because of their arthritis.

Finally getting out of Marawi felt like stumbling onto an oasis in the desert. The relief was almost overwhelming, but along with it, came a nearly paralyzing sense of uncertainty. They had no idea what was waiting for them on the other side but at least they knew they wouldn’t die by bomb fire or a stray bullet. 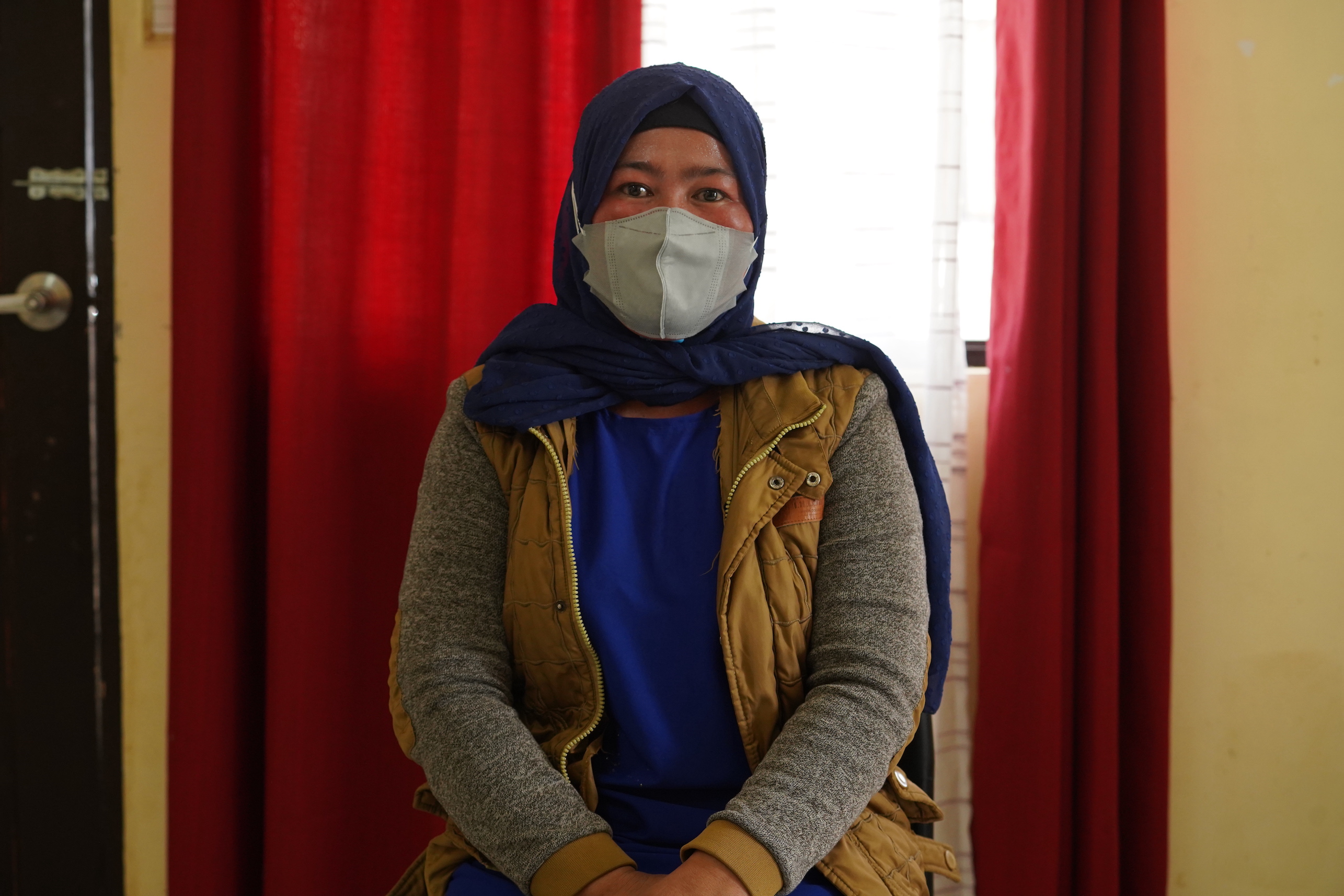 Hanifah Pangcoga shares how her family's experience during the Marawi siege and how they coped with the crisis. (Jason Casas/PIA-10/Lanao del Sur)
Delete

Her cousin came to fetch them in Saguiaran, but by that time messages were going around that evacuees wanting to cross the provincial border needed to wear white to be identified. Her husband prioritized their children and tied white strips of cloth to their wrists and the family made their way to Iligan.

They stayed in Iligan for a day before going over to Balabagan to stay with her husband’s relatives. As much as they appreciated the refuge, the living conditions, specifically the lack of electricity, wasn’t good for her mother’s condition and Hanifah moved to Cotabato with the rest of her siblings. It was there where the weight of everything started wearing them down. Although they had financial aid from their relatives who managed to evacuate to Manila, they still reached a point where they had no choice but to sell their phones to get some cash.

Around one month after they arrived in Cotabato, they received word that Bacolod-Kalawi’s then-mayor, Abdulmohaimen Dipatuan, would utilize the municipality’s resources to fetch any internally displaced person (IDP) from the municipality. All they had to do was contact him and he would get them home wherever they were.

Hanifah, born and raised in Kalawi, did not hesitate to call. True to his word, former mayor Dipatuan reunited Hanifah with her family in Poblacion-2, where they settled not too long after. Her cousin was a chairperson which meant that she had connections and they were never behind the news when it came to relief packages and groceries. Their life in Kalawi was good, but just as things started regaining a sense of stability, rido broke out within the area and they were once again forced to move.

The family moved in with her husband’s grandparents in Bubong, where they re-established their barbershop, but even with their livelihood, they still struggled to make ends meet. The lack of cellular signal and outside communication was unsettling for Hanifah and she tried her luck in Balo-i, Lanao del Norte.

While she was in Balo-i, she came across a program called Rebuilding Marawi Through Community-driven Shelter and Livelihood. Curious, she searched the list of beneficiaries under it and was shocked to find theirs. She was told to go to the City Hall where she was introduced to UN-Habitat, an international non-governmental organization. There, they explained how Rebuilding Marawi was a housing and livelihood program headed by the UN-Habitat and funded by the People of Japan. In collaboration with the National Housing Authority (NHA) and Technical Education and Skills Development Authority (TESDA), Rebuilding Marawi not only established housing programs for families who lost their homes to the siege but also arranged skill training seminars to increase their beneficiaries’ chances of restarting their livelihood.

After passing all the requirements, Hanifah and her family waited for three years before they finally got the call that they were one of the first 50 who would be receiving their permanent shelter. On top of skill development training, they were also given the opportunity to attend social awareness training like Environmental and Social Safeguards. Hanifah revealed that the shared trauma they went through only caused Rebuilding Marawi’s beneficiaries to foster a community of openness and unity that many of them believe to be a safe space to raise their families.

Now, on the days when she can watch her children run around and play with their neighbors, she can’t help but reflect on all that they have lost and all the things that they have gained. When the siege uprooted them from their lives five years ago, it was hard to believe that they could ever recover. But now, when she walks around their village, gossips with her neighbors, and sends her children to school, it sometimes hits her how far they have come.

They are still recovering, and maybe there will always be a part of her that tears up whenever she remembers what they had to go through, but what’s important to her now is that her family is safe and that they can finally stop worrying about whether or not they’ll be uprooted again. Their recovery is slow, but it is there, and every time she looks around, Hanifah can say that “pagbangon” really is possible. She’s home now and, to her, that’s all that matters. (PJF/PIA-10/Lanao del Sur)