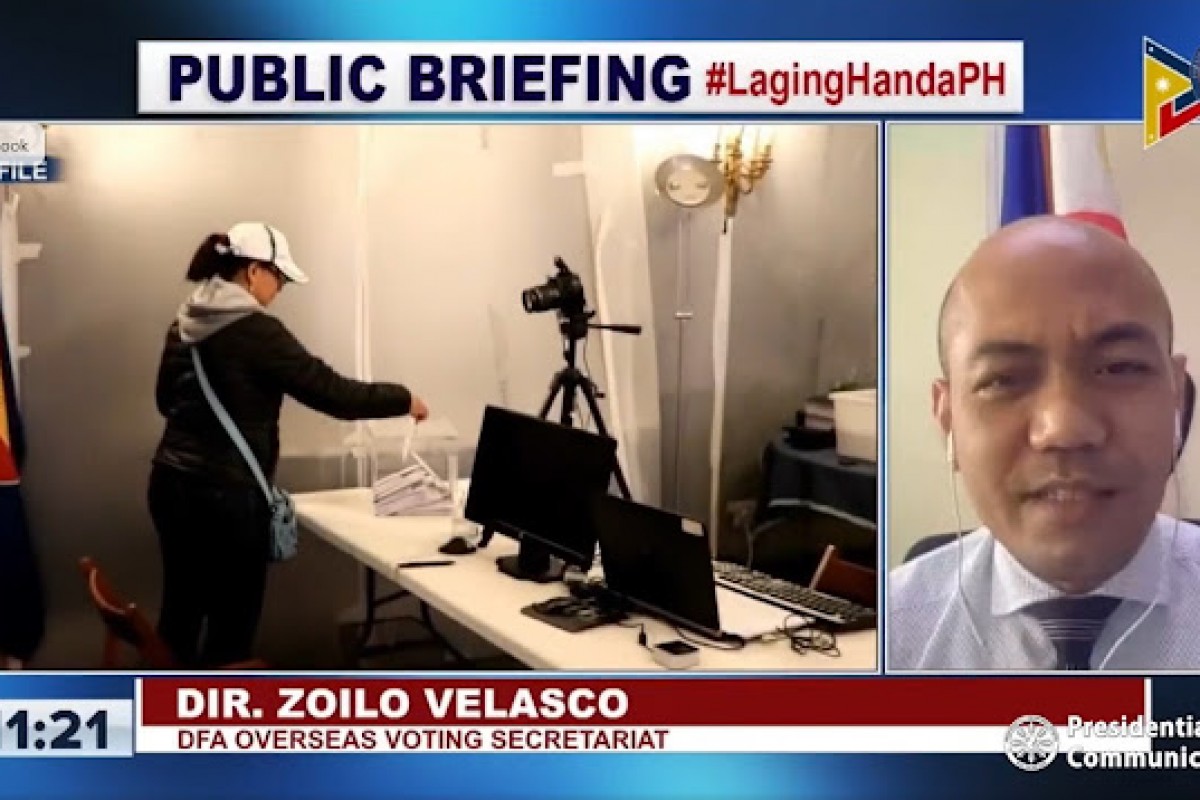 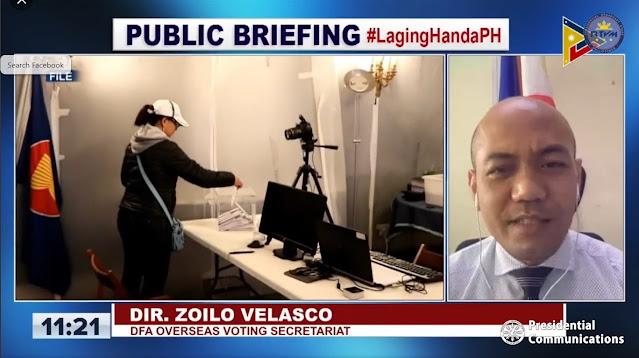 QUEZON CITY, (PIA) -- The Department of Foreign Affairs-Overseas Voting Secretariat (DFA-OVS) said Wednesday the results of the overseas absentee voting would be finalized within the week.

During a Laging Handa briefing, DFA-OVS Director Zoilo Velasco said the special board of canvassers (SBOC) in different Consulates and Embassies are currently consolidating and canvassing the votes.

Meanwhile, he described as a "success" the conduct of the 2022 overseas absentee voting, citing a record 32 to 33 percent that already surpassed the 31.45 percent voter turnout in 2016.

There are close to 1.7 million overseas Filipino voters for the 2022 national elections, according to government data.

"Masasabi nating it's a success dahil nalagpasan natin 'yong record noong 2016 election. Despite na may pandemya na naglimita ng movement ng tao, successful pa rin ang voting natin (We can say that this is a success because we surpassed our record in the 2016 election. Despite the pandemic that limited the people's mobility, we were able to conduct this successfully)," he said.

In the United States, Philippine Ambassador Jose Manuel Romualdez said the election went well despite the load of work at the Embassy.

"I think very well in sending out the ballots even with Comelec delays coming from Manila. Our total number of registered voters in the US is only 212,528," he told the Philippine News Agency.

"The most challenging is having the juggle our embassy staff despite coordinating the many meetings with visiting Philippine cabinet secretaries with their counterparts. We got it all done just the same," he added.

The same goes for the Philippine Consulate in New York, which earlier faced issues with the delays and the vote-counting machines themselves.

"Despite the delay in the arrival of ballots from the Philippines and other challenges such as technical issues with the vote-counting machines and a Covid outbreak that sidelined most of us, we were able to make it possible for more kababayan to exercise their right to vote compared to previous elections," Consul General Elmer Cato said.

In Morocco where the Philippines has only recently reopened an embassy, at least 75 percent of the 720 registered overseas voters cast their ballots on May 9.

"Considering we are a new embassy, I think we did well. We started registering voters in June 2021 only. For this election, we had 720 registered voters and 542 voted," Philippine Ambassador to Morocco Leslie Baja said in a report by the Philippine News Agency.

Velasco said the staging of OAV in Shanghai would now depend on the Commission on Elections (Comelec).

Velasco noted that election authorities might consider the number of registered voters if the figures would be able to "make difference" in the votes of candidates, not only in the presidential but also in the senatorial and party-list.

The overseas absentee voting in Shanghai was put on hold following the series of outbreaks there that forced local authorities to impose lockdowns. (PIA-NCR)