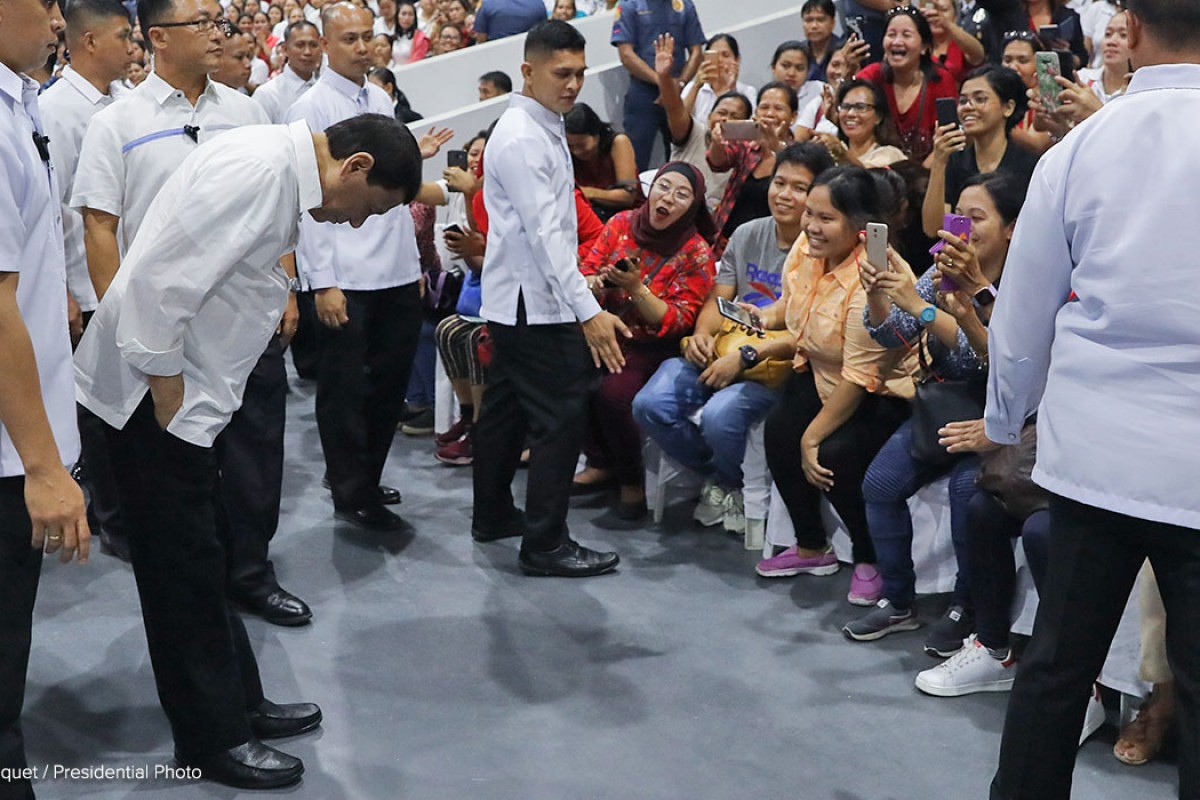 “President Rodrigo Roa Duterte recognizes the sacrifices of our OFWs just to provide a better future for their families. As our modern-day heroes, the government made sure that they are one of our top priorities by ensuring protection and promotion of their rights and welfare,” Bello said in his report on Tuesday at the Duterte Legacy Summit at the Philippine International Convention Center (PICC) in Pasay City.

Bello admitted that he is one with Duterte in giving the Filipino people a safe and bright future.

“We, in the Department of Labor and Employment, are committed to create an environment that will generate decent work for Filipinos here in the country, so that working abroad is a matter of choice, not a necessity,” he added.

He noted that the government must assure that those who are working overseas are always protected.

“As long as there are Filipinos working abroad, it is always our duty to ensure and strengthen the promotion and protection of our OFWs in every stage of the migration cycle -- from recruitment to deployment, on-site, return and reintegration,” Bello said.

The government has improved access to government services through the establishment of 18 One-Stop Service Center for OFWs (OSSCOs), which aims to reduce transportation expenses and shorten the processing time of more than seven million OFWs nationwide.

The Duterte administration continues to implement strong measures against illegal recruitment through proper documentation, education and advocacy, and investigation, as well as prosecution of erring recruitment agencies.

It has served over 140,000 OFWs who were provided with legal assistance and it resulted in the conviction of 40 illegal recruiters.

The DOLE has signed 26 International Labor Agreements with different countries in the area of labor, employment as well as migration, and has also provided additional protection to ensure that their rights are protected and their welfare is promoted.

Among the host countries where the Philippines has an existing BLA (bilateral labor agreement) are located in Asia, Europe, and the Middle East. These are Canada, Japan, China, Kuwait, Jordan, Israel, Korea, the Kingdom of Saudi Arabia, UAE, Taiwan, New Zealand, Germany, Switzerland, Lebanon, Libya, among others.

“Through our Philippine Overseas Labor Offices, we have provided a wide range of on-site programs and services to more than seven million OFWs,” Bello said.

The DOLE does not stop assisting OFWs even after their return to the country, as it has intensified its efforts to ensure decent and productive return of the OFWs to their families as well as to their communities.

“Through the Overseas Workers Welfare Administration (OWWA), the Department provided services and interventions through our enhanced Reintegration Program wherein more than 140,000 OFWs were given livelihood assistance and more than 150,000 OFWs were provided with training. Education and Development Scholarship Program were given to more than 250,000 qualified dependents of the OFWs,” Bello said.

In times of uncertainties

The DOLE has provided assistance for OFWs and their families such as calamity assistance. More than 340,000 OFW families who were victims of typhoons, earthquakes, volcanic eruptions, and the Marawi siege have benefited from the program.

When the COVID-19 pandemic hit, the DOLE protected and supported the displaced OFWs in the country and abroad.

Some 1.028 million OFWs were repatriated in April 2022. They were given accommodations, food and other welfare and medical assistance. Also, they were transported, by air, land and sea, to their final destinations to be with their families and loved ones in their home provinces.

To give them opportunities to start over, more than 500,000 affected OFWs were given PHP10,000 financial assistance or USD200 for those who opted to stay abroad under the Abot Kamay ang Pagtulong sa OFWs (AKAP).

The DOLE, together with the OWWA and CHED Uni-FAST, also provides Tertiary Education Subsidy amounting to PHP30,000 to more than 30,000 OFW dependents under the Tabang OFW Program.

“As we transition to the next administration, we are leaving behind a legacy that recognizes the services and heroism of our overseas Filipino workers. In honor of the economic contribution of our migrant workers, this administration has remained steadfast in providing the best service it could give to all the OFWs,” Bello said.

The DOLE also established the Overseas Filipino (OF) Bank which was tailor-made for the financial needs of OFWs. Almost 40,000 bank accounts had already been opened under this bank.

In coordination with the National Housing Authority (NHA), it has implemented a socialized and low-cost housing program for OFWs to provide an affordable and decent community for workers’ families.

“We also established the OFW Hospital that will provide the best quality medical care and health services to OFWs and their qualified dependents for free. As of today, it operates as a Polyclinic with service capability transitioning to an infirmary and eventually 102-beds level 2 hospital in the coming months,” Bello said.

He said one of the highlights of the Duterte government is when the President signed into law the establishment of the Department of Migrant Workers which will provide a more comfortable and productive life for all OFWs.

“As we end our term, we will continue what we have started and hope that the next administration can sustain the gains that we have achieved,” he said.

“Six years have passed and I can confidently say that we, in the Department of Labor and Employment, did everything in our capacity to provide a comfortable life to every Filipino worker. Thank you for allowing the Department to serve and make an impact on the lives of the Filipinos,” he added.  (PIA-NCR)