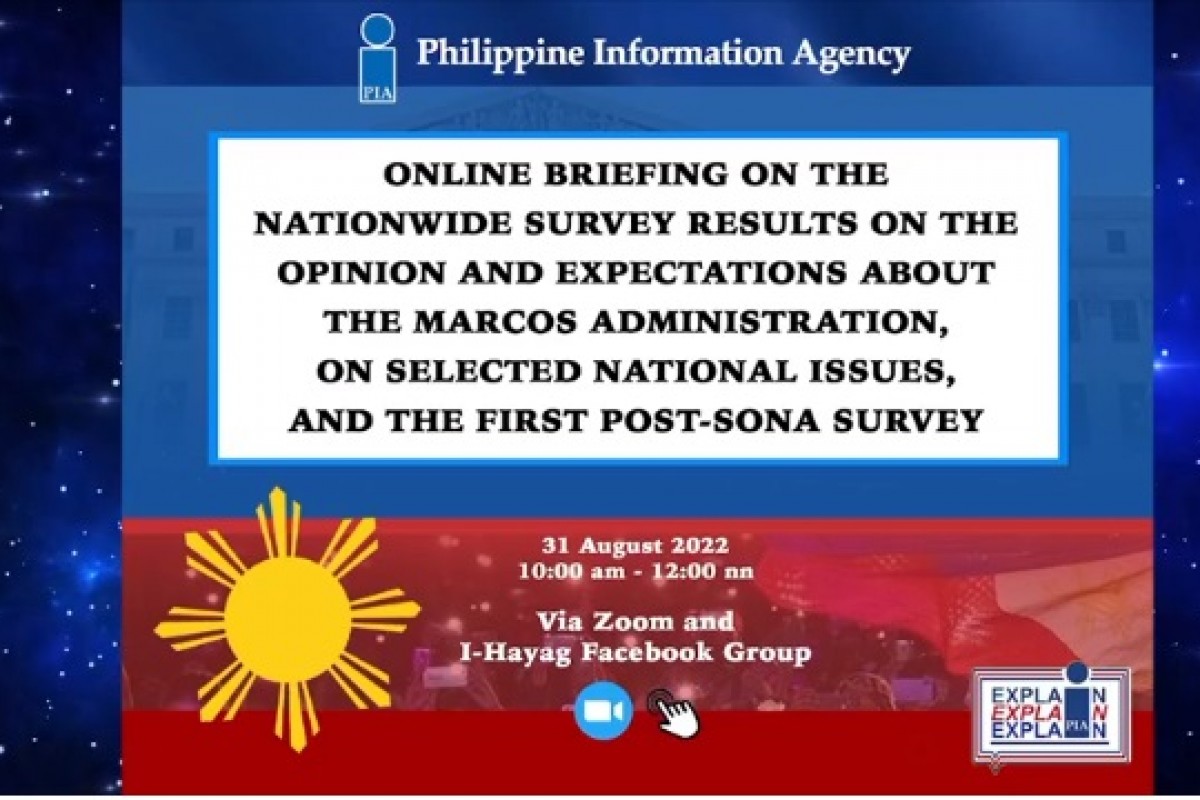 QUEZON CITY (PIA) -- The Planning and Communication Research Division (PCRD) of the Philippine Information Agency (PIA), in coordination with their Human Resource Development Division, held an online briefing on the Nationwide Survey Results on the Opinion and Expectations About the Marcos Administration, Selected National Issues, and the First Post-SONA Survey on 31 August 2022 via Zoom and I-Hayag Facebook page.

According to PIA Director General Ramon Lee Cualoping III, as the Agency moves forward, they have to be data-driven.

He added, “We embrace the data that we have. We maximize PCRD’s reach, talent, and their capacity for us to deep-dive and to understand the various facets and issues that affect our delivery of public policy to our various stakeholders and people that we have to engage and deal with.”

The target participants of the online briefing on the results of the three surveys were the regional heads or officers-in-charge, information center managers, regional research focal persons, PIA Central Office personnel from the Office of the Director General, Planning and Communication Research Division, Program Management Division, Regional Operations Division, and Creative and Production Services Division. 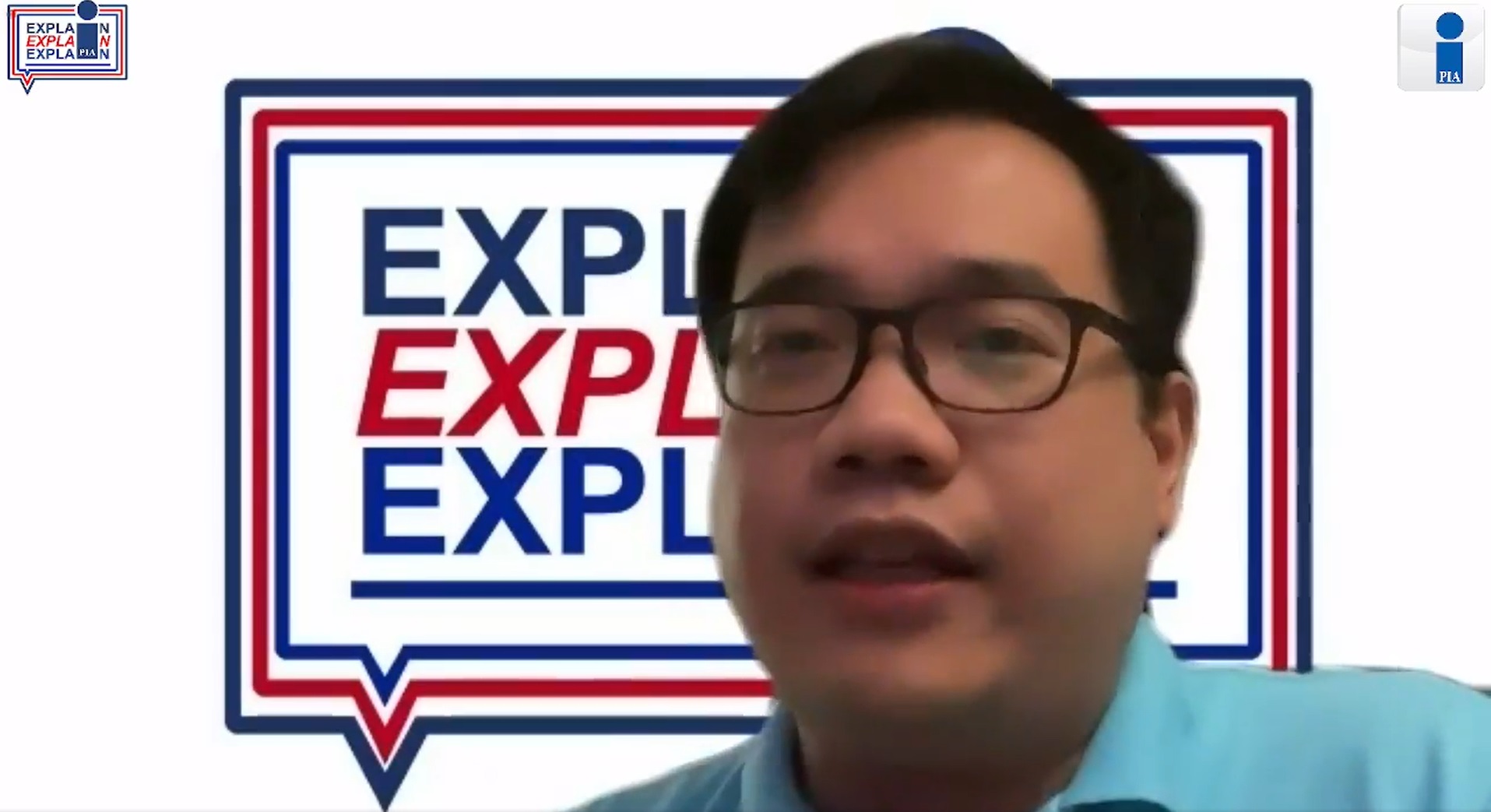 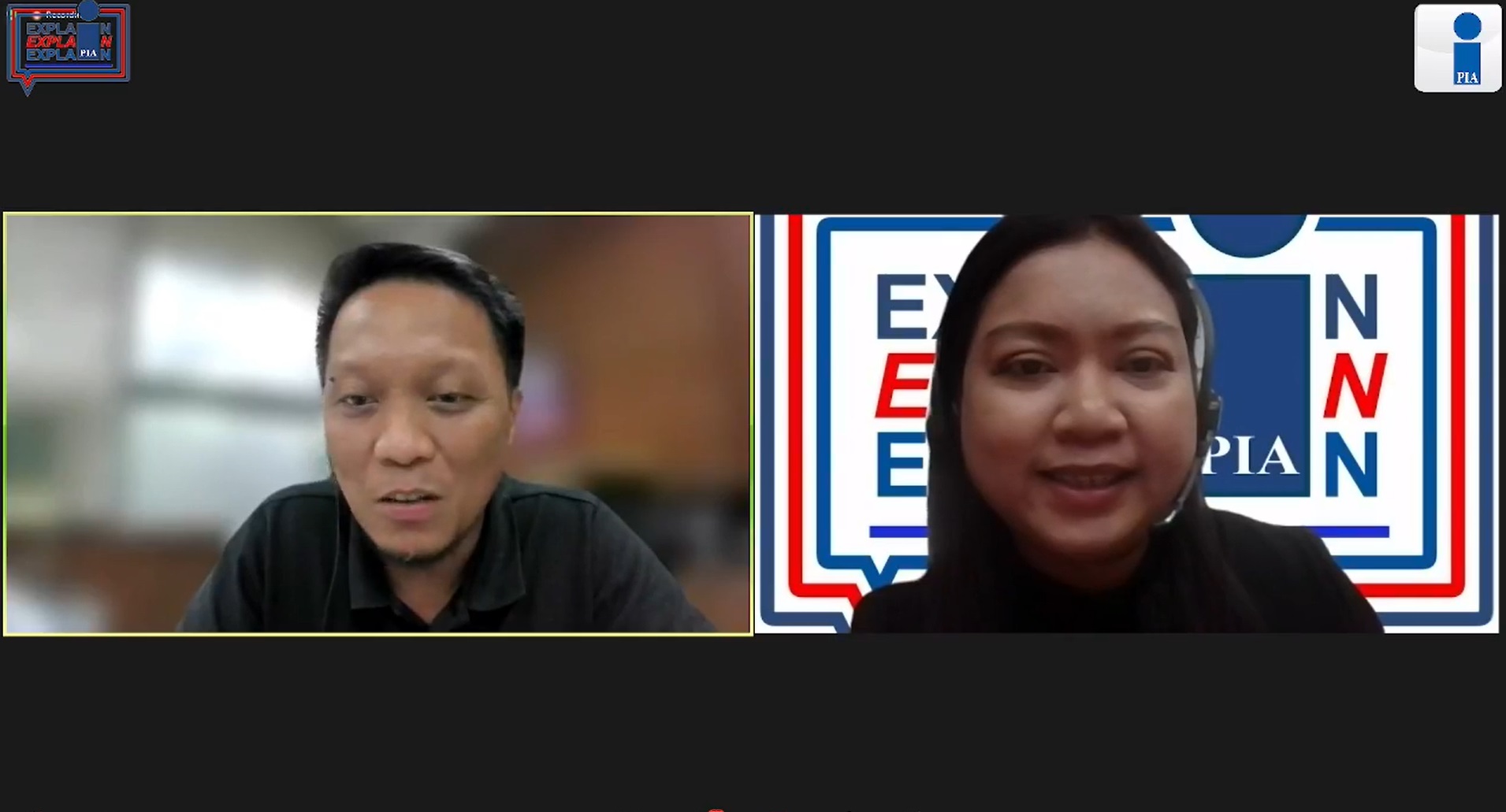 Survey on Sectoral Representatives’ Opinions and Expectations about the Marcos Administration

Meanwhile, half of the respondents rated their quality of life as “better” in 2022 compared to how it was in 2021. The majority of the respondents cited the high cost of living as the most challenging issue they experienced during the past 12 months.

More than half or 63% of the respondents in this survey believe that PBBM’s administration will lead the country to a better Philippines. The respondents said that the top five (5) urgent concerns that the Marcos administration needs to address are (1) controlling inflation or lowering the prices of basic commodities; (2) fighting graft and corruption; (3) reducing hunger and poverty; (4) improving the state of agriculture; and (5) improving the state of education.

The top five (5) priorities that the present administration must immediately address during its first 100 days are to (1) push for higher salaries for workers; (2) mitigate the impact of oil price hikes; (3) redesign the operations of PhilHealth and provide insurance for all; (4) lower the retail of rice to P20 per kilo; (5) ensure safe reopening and allow more schools to hold face-to-face classes.

The familiarity of respondents with the Philippine Information Agency is generally high across all regions and among all sectors. And the respondents think the Agency can help the administration through its mandate to continue providing accurate, timely, and relevant information. Respondents prefer IEC materials are feature articles, videos, photos, social media cards, print materials and puppet plays.

For the analysis of this survey’s result, responses from 1,573 respondents were used.

To address the rising oil prices, the following proposals were approved by a huge majority of respondents: (1) reintroduction of the Oil Price Stabilization Fund (OPSF) (83%); (2) amendment of the oil deregulation law (81%); (3) provision of transport ‘ayuda’ (76%); and (4) suspension of fuel excise tax (72.2%).

Among the respondents, 73% strongly agree with the order to suspend the operations of online cockfights or e-sabong. The majority of those who answered the survey, or 72% also strongly agree that e-sabong adversely impacts Filipino families while 47% strongly oppose a measure to make e-sabong legal in the Philippines. 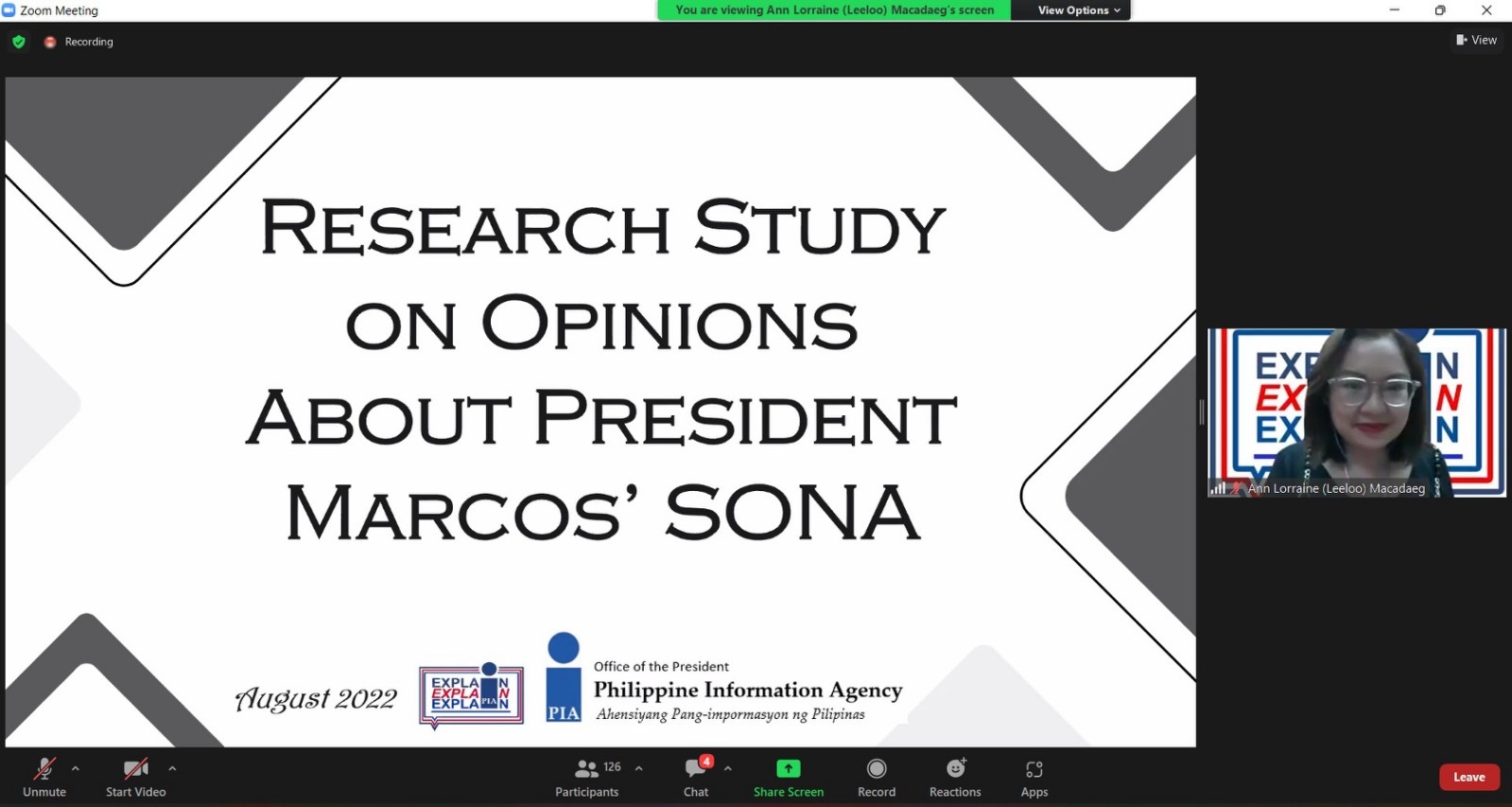 Respondents for this research numbered 1,196.

Among the topics discussed during the SONA, respondents like the following: (1) Agriculture; (2) Health; (3) Economy; (4) Others: all or everything about the speech, education, migrant workers, foreign policy, climate change, and digitalization. On the other hand, respondents disliked the SONA because of major issues not mentioned, the language used, and other reasons such as the institutionalization of mandatory ROTC, no plan for media, press freedom, and construction of a power plant.

For the suggestions on President’s Top priorities, 47.6% of the respondents said it should be ensuring economic recovery and growth; 36.4% believe it should be strengthening the agriculture sector; 35.9% push for the issue of improving access to healthcare, 29.3% said generating jobs and livelihood while 28.5% chose to respond to the coronavirus pandemic.

Among the news stories about SONA monitored by PIA Monitoring Unit from July 15 to August 3, 53.6% have a positive slant, 30.7% were negative and 15.7% were neutral.

Generally, the public received President Marcos’ first SONA positively. The top topics which the Filipino public is concerned about are agriculture, economy, and health.

To end the briefing, PIA-PCRD Officer-in-Charge Frances Mae Macapagat expressed gratitude to everyone who contributed to the success of the three surveys presented.

She said, “consistent with PIA Director General Ramon Lee Cualoping’s banner campaign for the PIA, the Explain, Explain, Explain, we in the PCRD intend to support this by providing regional offices and the central office with timely and accurate data to make our activities and IECs more helpful, useful, attractive, and relevant in the eyes of our target audience.”

For feedback and inquiry on the surveys conducted, send an email to pcrd@pia.gov.ph. (ARB - PIA CPSD) 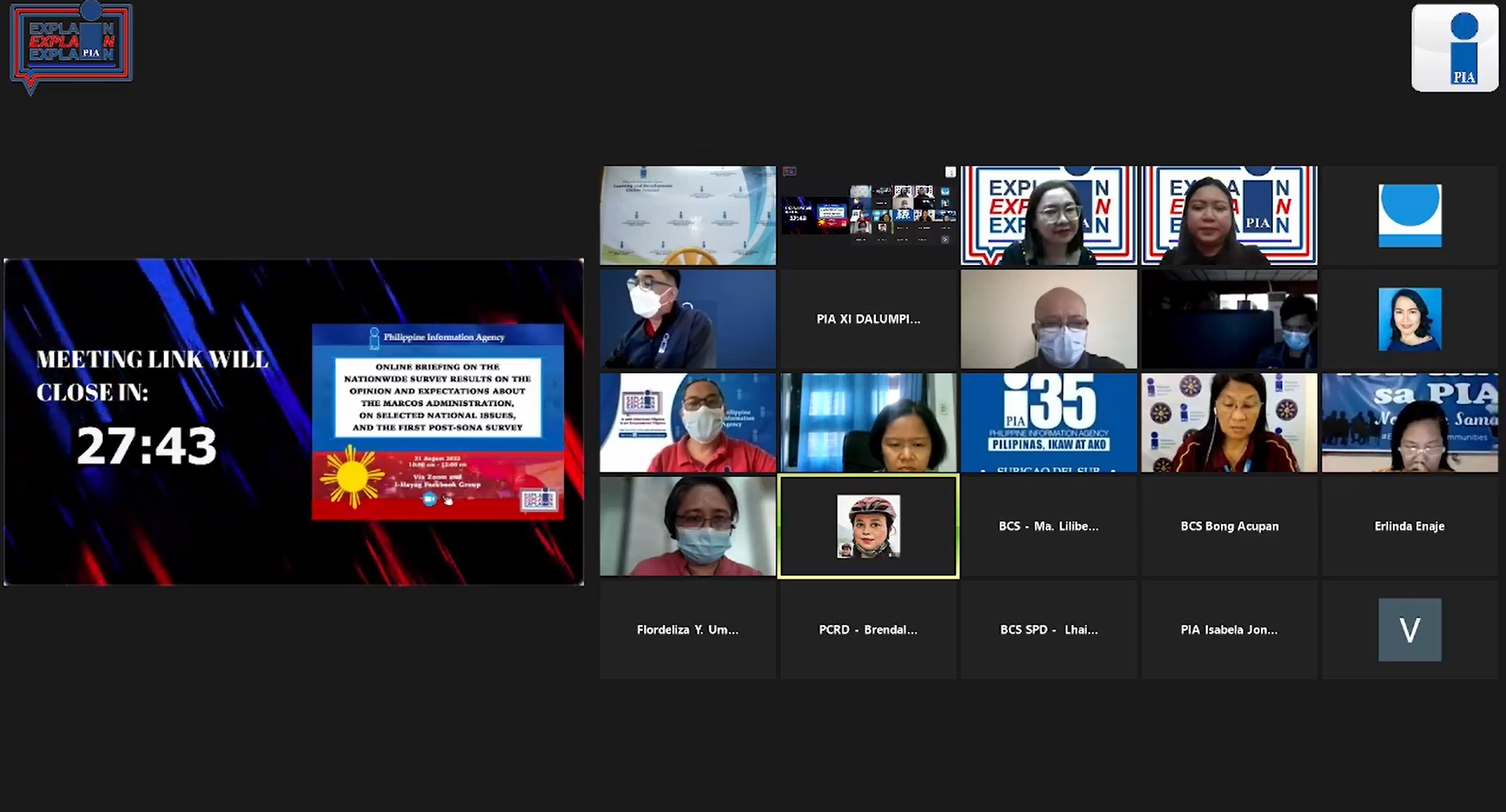