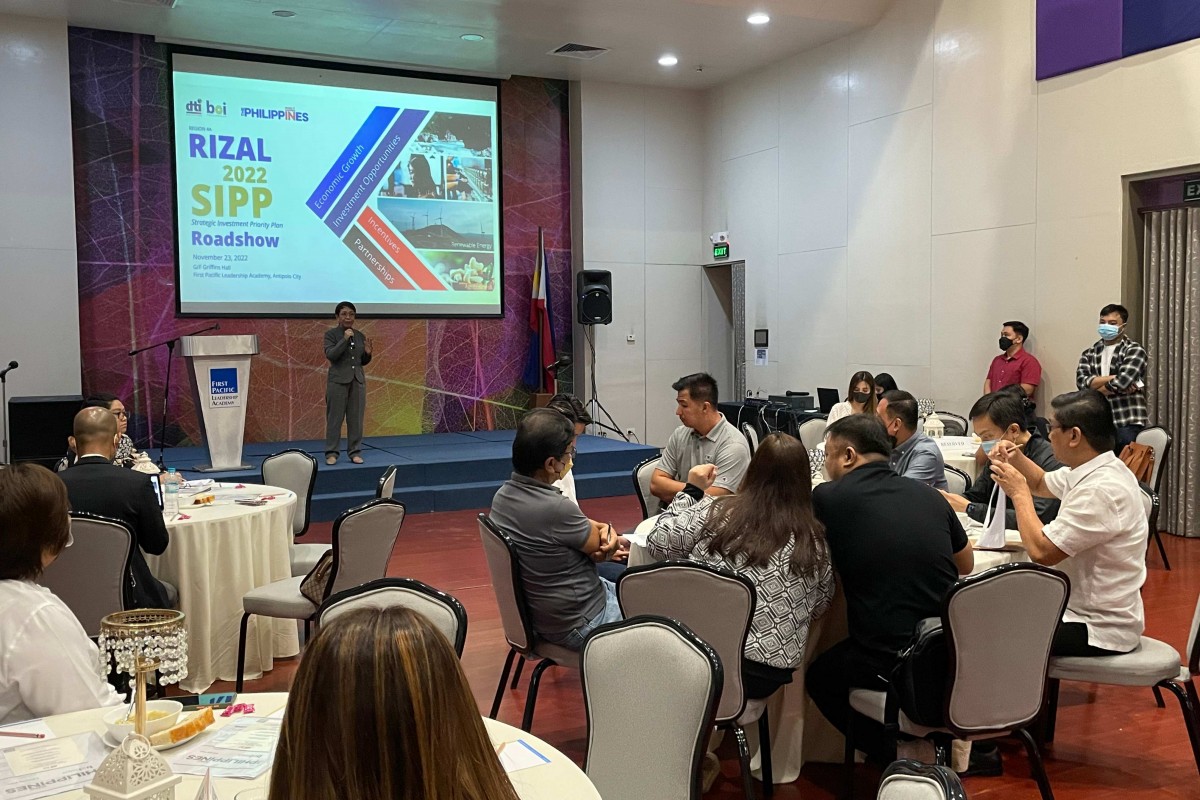 ANTIPOLO CITY, Rizal (PIA)— The Department of Trade and Industry - Rizal and the Board of Investments gather local entrepreneurs and stakeholders for the Strategic Investment Priority Plan (SIPP) Roadshow.

The roadshow, held at the First Pacific Leadership Academy, Antipolo City this November 23, aims to drum up economic activities and developments especially in the countryside to attract large industries and empower micro, small and medium business enterprises.

Rizal Vice Governor Reynaldo “Junrey” San Juan notes in his welcoming message that Rizal, as the country’s most competitive province for seven consecutive years, is a place with various business opportunities, a good road network due to its proximity to Metro Manila, and ease of doing business.

“In the end we can see the transformation of our economy to a new and efficient one,” Vice Governor San Juan says.

DTI Rizal Director Cleo Duran adds that the Rizal roadshow is the first to SIPP to be held on a provincial level.

“That (the roadshow) alone speaks that BOI is looking at us and we have to be prepared,” says Provincial Director Duran.

Director Duran said in an interview that DTI will gather the investment officers of all local government units to collate and package necessary data on Rizal for presentation to potential investors.

When asked on priority areas for investment, Director Duran says, “It will be aligned with what is stated in the provincial economic agenda. We will fit in with the tiers of national investment priority, it will go along that line but I think anything can be given here as long as it is in line with the sustainable development goals.”

Architect Jose says that upland portions particularly in Tanay are identified as ecotourism areas while the province in general has established transportation services and dependable power, water and telecommunications services.

He adds that there are also lands for agricultural development as well as large areas and vacant spaces for possible development noting that wind power generation is also feasible given the province’s wind profile.

Fiscal incentives are given to priority investment areas such as tax exemption on Taxes on Transfer of Real Property Ownership, Taxes on the Business of Printing and Publication, Franchise Taxes, Amusement Taxes and, Taxes on every Delivery Van or Truck for 5 years (small enterprises), 8 years (medium) and, 10 years (for large).

Architect Jose said that non-fiscal incentives such as one-stop-shop documentation for simplified registration procedures, assistance in resolving concerns and support for industrial peace through reconciliation and mediation.

Entrepreneurs also aired issues and concerns to keynote speakers in an open forum in the latter part of the SIPP Roadshow. (GG/PIA-Rizal)