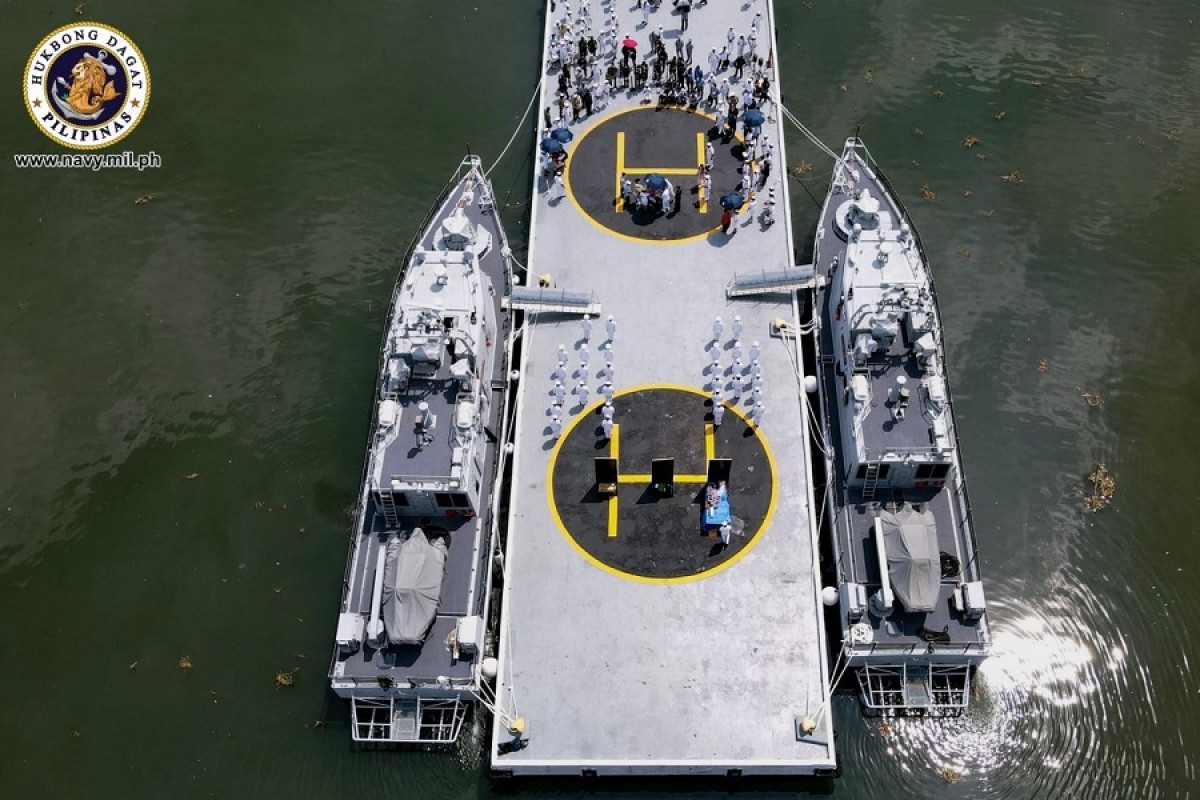 The Israeli-made fast attack interdiction craft BRP Nestor Acero (PG-901), and another missile boat, BRP Lolinato To-Ong (PG-802), are the first two out of the nine FAICS-Ms acquired by the Philippines from Israel Shipyards Limited for P10 billion.

The two FAIC-Ms were sent off and deployed to their areas of operation shortly after the commissioning rites.

The two ships were formally christened in rites at the PN headquarters last Sept. 6.

"Their addition to the fleet inventory is a significant step forward in the Navy's ongoing capability upgrade towards achieving a minimum defense posture and asserting greater efficiency in the execution of its mandated task, especially with their deployment to vital choke points, key sea lines of communication, and littoral areas of the country where terrorist groups and other lawless elements are operating," Navy spokesperson Commander Benjo Negranza said.

These are the first two out of the nine FAICS-Ms acquired by the Philippines from Israel Shipyards Limited for P10 billion.

These ships have a displacement of 95 tons, a maximum speed of 40 knots, and a range of 1,000 nautical miles.

"This acquisition aims to strengthen the country's naval capability in terms of enhancing littoral defense and maritime interdiction operations as it will complement the previously acquired 12 MPAC (multi-purpose attack craft) of the PN," Negranza said.

These two FAIC-Ms were sponsored by Soledad B. Bacarro, the wife of Armed Forces of the Philippines (AFP) chief-of-staff.

The two vessels were loaded aboard a cargo ship and departed Haifa, Israel in late August. These vessels were formally launched last June 26.

Three more vessels are scheduled to be delivered starting this year.

These 32-meter high-speed vessels are equipped with quick intercept ability, remote stabilized weapons, and short-range missiles that are capable of delivering precision strikes against larger hostiles and high-value targets on land and sea.

Four of these FAIC-Ms will be armed with non-line-of-sight (NLOS) missiles with pinpoint accuracy and a range of 25 kilometers while the other five will be armed with Typhoon-mounted 30mm main cannons and .50 caliber heavy machine guns.

The acquisition of these FAIC-Ms are among the 2019 projects approved by former President Rodrigo Duterte under the Horizon 2 List of the AFP Modernization Program.

"This acquisition also represents a major leap in the Self-Reliant Defense Posture Program of the country as the deal involves the transfer of technology that allows the local manufacturing of three platforms at the PN shipyard in Naval Station Pascual Ledesma, Cavite," Negranza said.

The notice of award for the FAIC-M project, worth around P10 billion, was issued on Jan. 5 last year.

These are expected to replace the force of patrol killer medium (PKM) or medium-sized patrol craft.

Once deliveries of the FAIC-Ms are completed, these vessels can interdict surface threats and launch non-line-of-sight missiles safely using the surrounding littoral areas as maneuver space and cover.

Meanwhile, Adaci said the FAIC-Ms will help the PN address maritime security threats that are unique to the Philippines.

"As you know the Philippines' geographic configuration is unique. It is characterized by complex and contested waters, porous borders and proximity to major regional sealines. This archipelagic nature of our country, therefore, presents both opportunities and challenges to the Philippines' maritime security. The two new fast attack interdiction crafts that we are commissioning today are specially designed to equip the Navy's capability in addressing threats within this complex and unique archipelagic condition in a precise and swift manner," Adaci said in his speech.

Adaci also said the FAIC-Ms approximately conform to the operations in the context of a unique geographic configuration like the Philippines.

"PG-901 and PG-902 have accurate, high performance, and quick intercept capabilities that are adequate for addressing current and emerging security threats," the PN chief said.