MANILA -- Foreign Affairs Acting Undersecretary Maria Theresa Lazaro mapped out the Philippines’ priorities for its upcoming Philippine Country Coordinatorship of ASEAN-EU Dialogue Relations at a meeting with fellow Senior Officials from ASEAN and the European Union that was held online on 08 July 2021.

The Philippines will assume its three-year Country Coordinatorship for ASEAN-EU Dialogue Relations after the ASEAN-EU Post Ministerial Conference in August 2021. The EU has been an ASEAN Dialogue Partner since 1977.

A Commemorative Summit is proposed to be held in Brussels, Belgium in 2022 during the Philippines Coordinatorship, to mark the 45th anniversary of ASEAN-EU Dialogue Relations.

On regional security issues, the Philippines reiterated its commitment to the early conclusion of an effective and substantive Code of Conduct in the South China Sea (COC) that is consistent with international law, particularly the 1982 UNCLOS. Acting Undersecretary Lazaro also stated that the Philippines seeks the expeditious implementation of the Five-Point Consensus on the situation in Myanmar reached in Jakarta during the ASEAN Leaders’ Meeting held in April. The results of the April meeting were also noted by the EU representatives, most of whom strongly expressed serious concerns about the increased violence and deteriorating human rights situation in Myanmar, and joined ASEAN SOM Leaders in their support for the Five-Point Consensus.

The Meeting highlighted the need of both ASEAN and EU to build back a better and greener post-pandemic world, taking into account sustainable development goals and the need to address the impacts of climate change. The EU officials mentioned that greener post-pandemic efforts would be discussed at the 2021 United Nations Climate Change Conference (COP26) to be held in Glasgow later this year. 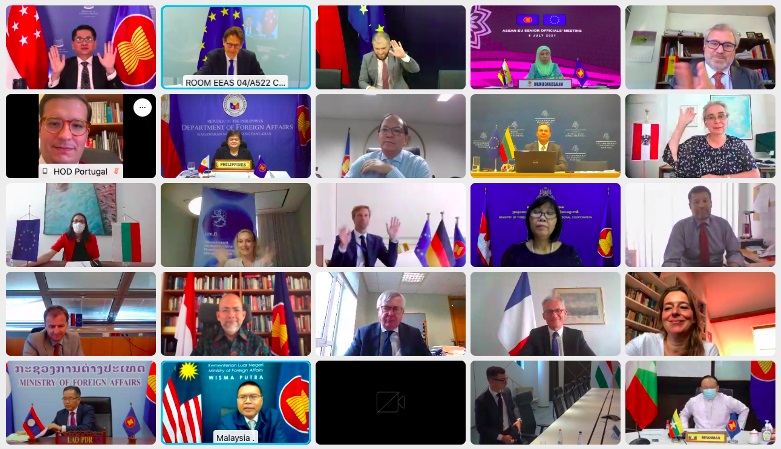 On COVID-19 recovery efforts, the Meeting noted EU’s donation, through the Team Europe Programme, of 800 million euros to combat the pandemic, as well as the pledge of 100 million doses of COVID-19 vaccines to the COVAX facility. The Meeting also called for equitable access to vaccines and vaccine multilateralism.

EU member countries also emphasized increased economic cooperation and highlighted the significance of the soon-to-be finalised ASEAN-EU Comprehensive Air Transport Agreement to the region’s connectivity and economic growth. The Meeting also discussed the importance of identifying synergies between the MPAC 2025 in the areas of sustainable infrastructure, digital innovation, and people mobility, and the EU Connectivity Strategy in the pillars of energy, digital, transport and people-to-people interactions.