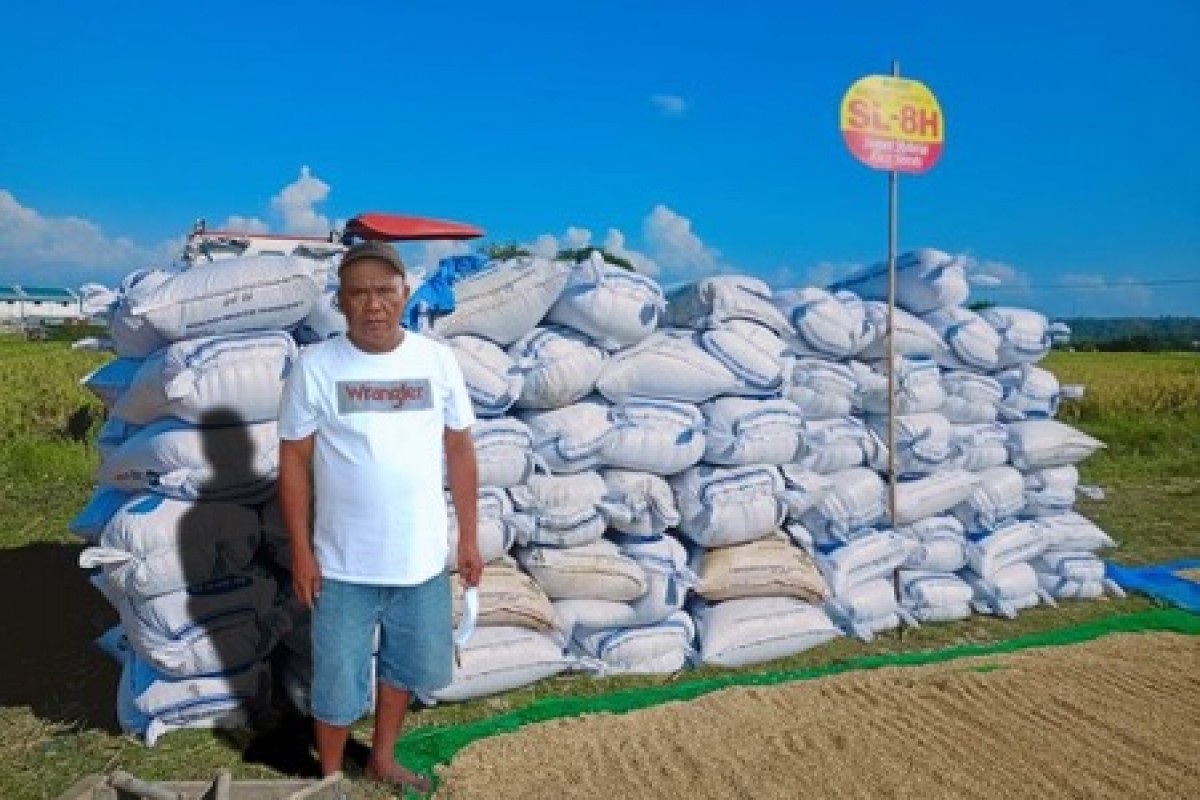 Passion for farming is his key to success

When 47-year-old George T. Pasion, Jr. of Barangay San Marcos, San Nicolas, Ilocos Norte decided to follow his father footsteps in farming, he knew he would need to adapt to change in many aspects of rice farming. From planting to harvesting, Pasion was prepared to embrace every struggle that would come and challenge his methods.

“Alagaan pag tinanim, hindi pabayaan,” these are Pasion’s words, describing his methods for the past 25 years being a farmer. With 3 children and a supporting wife, Pasion managed to have all-year round cropping.

Armed with dedication to his work, Pasion and his father were among the first farmers in Ilocos to use hybrid rice and, to be precise, using the SL-8H developed by SL Agritech Corp. (SLAC).

Given the weather condition in Ilocos Region with the highest temperature from March to June, it became the perfect opportunity for Pasion to plant SL-8H as it is resilient in dry season.

This is the beginning of Pasion’s journey in making SL-8H variety his top and only choice of palay(unmilled rice) during dry season. He and his father’s breakthrough of harvesting more than 200 cavans per hectare since 2003 prompted him to continue on planting this variety in his paddy fields. Summing it up, a total of 3 hectares were planted purely with SL-8H variety.

“Sumubok ako ng ibanghybrids, pero hindi kasing ganda ng ani saSL-8H (I tried using other hybrid varieties, but the quality is not good as SL-8H),” Pasion said as he proudly reported the 285.6 cavans or 14.3 metric tons per hectare (MT/ha) of rice he harvested this last cropping season (April 2021). The SL-8H (NSIC Rc-132H) seeds were given to him, along with the many farmers in Ilocos Region by the Department of Agriculture (DA) Regional Field Office 1, under the government’s Rice Resiliency Program.

He also noted that the SL-8H grains are noticeable to be whole, not cracked or granulated if compared to the other hybrid varieties. This quality of grain is the key why using SL-8H is profitable to farmers and being a “devotee” is unquestionable.

Pasion, who is also the president of the Barangay San Marcos Farmers’ Association, became the “apple of the eye” of many farmers who were inspired by his loyalty to SL-8H. With his regular harvest of more than 200 cavans per hectare of palay during dry season, his friends and kabarangaywere easily swoon over to use SLAC’s flagship—SL-8H, as almost everyone in his barangay are now “Ka-SL-8H.”

In fact, he has many experiences of using inbred rice from land preparation to harvesting and the process is no different at all.

“Parehas lang ang araw, oras at (higit sa lahat) pagod kahit anongvariety ng palay ang gagamitin,” Pasion said as he explained his routine in the farm. Like other rice variety, part of his daily challenges is dealing with pests and diseases which can be controlled.

In his paddy fields, Pasion has no special techniques to control pests and diseases but he is always in the position of controlling the imminent threats to his farm. Such agricultural practice is spraying bio-control agents against snails and other pests before planting.

According to Pasion, the yield from the SL-8H variety is more than double or triple than the usual inbred varieties of palay. With his perseverance in farming, the time and money he spent are his investments that he wanted other farmers in the country to adapt—a regular income of P200K during dry eason.

He said that PhP 50K to PhP 100K is a small investment, as the earnings will definitely cover all the efforts poured in farming.

The relentless efforts of Pasion in farming paved the way for his eldest child to graduate with a Bachelor’s degree in Accountancy. From the bulk of his earnings only during dry season, he was able to support the studies of his children.

As he continued his cropping this wet season, he will take a risk of using another variety of SL, the SL-20H, in this cropping season. Said to be an all-weather variety, SL-20H is also resilient during the wet season. And so, Pasion is very eager and hopeful that this yield will also become double or triple using SL-20H.

“Malaki ang pasasalamat ko saDepartment of Agriculture na nabibigyan kami ng ganun(suporta) (I am really thankful to the DA which provides such support),” Pasion expressing his heartfelt gratitude as one of the many beneficiaries of free seeds from the rice resiliency program of DA.

But Pasion, as the farm leader in Barangay San Marcos, reminded himself and his farmer members that “we should not be dependent alone in the support coming from DA”.

“Hindi naman kailangan iasa lahat sa kanila (DA)”, Pasion explained referring to DA. “Nasa ugali ng tao ang pag-asenso,” he added. His experience taught him well that support from DA will be unproductive if farmers will not do their part.