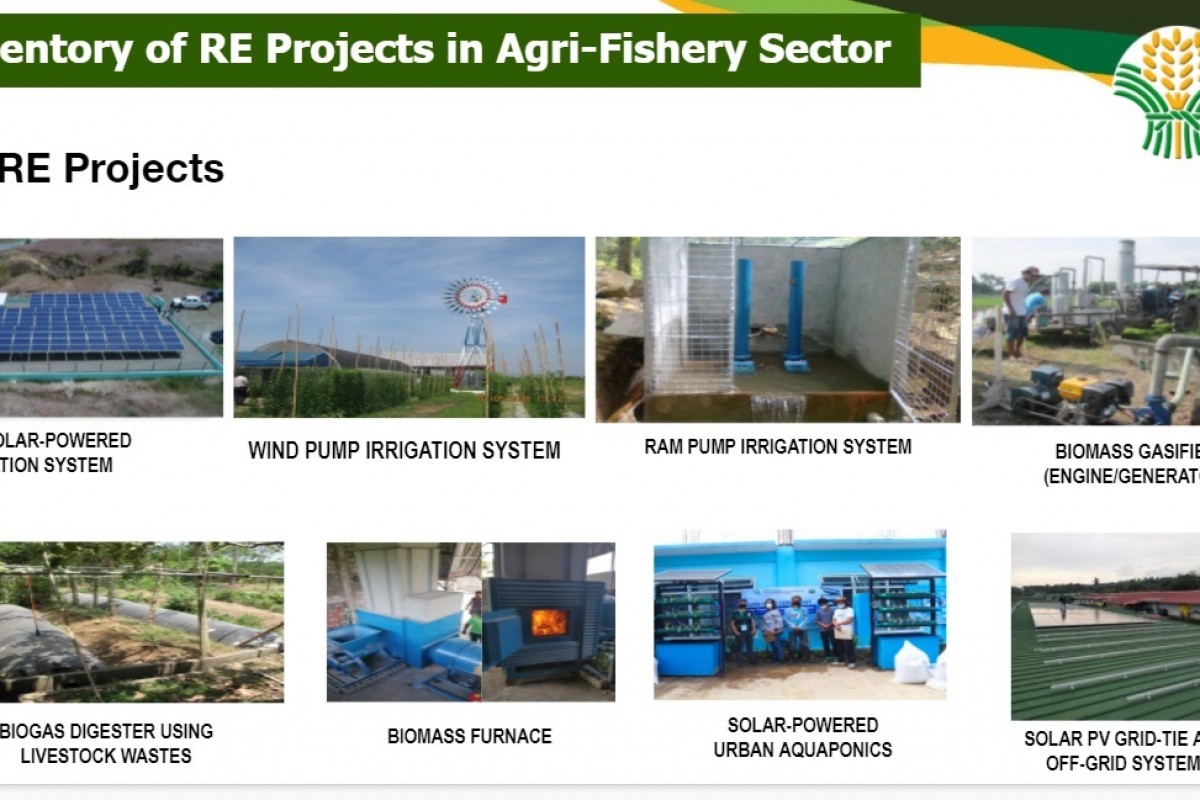 QUEZON CITY -- The Department of Agriculture (DA) and the Department of Energy (DOE)  is eyeing on increasing the utilization of cost-efficient renewable energy (RE) systems and technologies in the country’s agriculture and fisheries sector.

The Agriculture and Fisheries Modernization Act of 1997 mandates the DA to coordinate with DOE for the identification and installation of appropriate types of energy sources particularly in the use of non-conventional energy sources for the locality in order to enhance agriculture and fisheries development in the area. “Along that line, DA and DOE entered into a Memorandum of Agreement (MOA) and a Joint Memorandum Circular (JMC) where a major item is for a renewable energy program to be formulated and implemented,” said Bureau of Agricultural and Fisheries Engineering (DA-BAFE) Dir. Ariodear Rico.

The Renewable Energy Program for the Agri-Fishery Sector (REPAFS) is an eight-year program that will be implemented from 2022 to 2030. REPAFS acts as the blueprint in the effective and efficient integration of RE in agriculture and fisheries sectors, and serves as a component of the National Renewable Energy Program (NREP). Formulation of REPAFS is spearheaded by DA, through BAFE.

“The goal of REPAFS is to promote the use of RE in the agriculture and fishery sector for enhanced productivity, sustainability, and environmental protection,” Dir. Rico explained.

Chaired by DA-BAFE and co-chaired by DOE’s Renewable Energy Management Bureau (REMB), the Joint Technical Working Group (JTWG) is tasked to provide technical support in the formulation of the REPAFS.

Since 1988 up to the present, renewable energy (RE) projects have been implemented by various DA bureaus and attached agencies.  These RE projects include Solar-Powered Irrigation Systems (SPIS) (implemented by BSWM, DA-RFOs, NTA, DAR, and NIA), Solar-PV Grid-tie and Off-grid Systems (PFDA and BPI), Solar PV for Street Lighting (PFDA), Solar PV for Curing (NTA), Solar PV for Water Pumping and Aeration of the Aquaponics - Aquaculture Production System (BFAR), Wind-Powered Irrigation System (BSWM and DA-RFOs), Ram Pump Irrigation System  (BSWM and DA-RFOs), Biomass Furnace and Gasifier (PHilMech and DA-RFOs), and Small-Scale Biogas Plant (BAI, PCC, DA and DOST). An inventory of completed and on-going RE projects in the Philippine agri-fishery sector shows that 72% is on biomass, 20% solar, 4% wind, and 3% hydro.

The adoption of renewable energy technologies in agricultural activities offers promising prospects in addressing food and energy security together with the objective of environmental sustainability.  However, despite the potentials offered by renewable energy, the rate of adoption is relatively slow due to many challenges. These challenges are high cost of investment, limited support to RE technologies, lack of market-driven activities to showcase latest RE technologies, lack of skilled and competent technical experts, low number of existing standards for RE technologies, limited financing and credit support, and lack of incentives for RE end-users among others.

REPAFS short-term projects from 2022 to 2026 will include pilot demonstration sites; enhancement of existing technologies; introduction of technology business incubators (TBIs) to local manufacturers of RE machinery and equipment; promotion of RE technologies for agri-fisheries production and postharvest operations; integration of design of different RE systems as additional or alternative power source of agricultural and fisheries facilities (including comparative cost studies for different RE set-up); special training for the preparation of RE Project Proposal; promotion to avail fiscal and non-fiscal incentives under RA 9513 to incentivize RE developers, manufacturers, fabricators, end-users of RE systems, and producers of energy feedstock; and inventory and assessment of different implemented RE systems and technologies in agri-fishery sector.