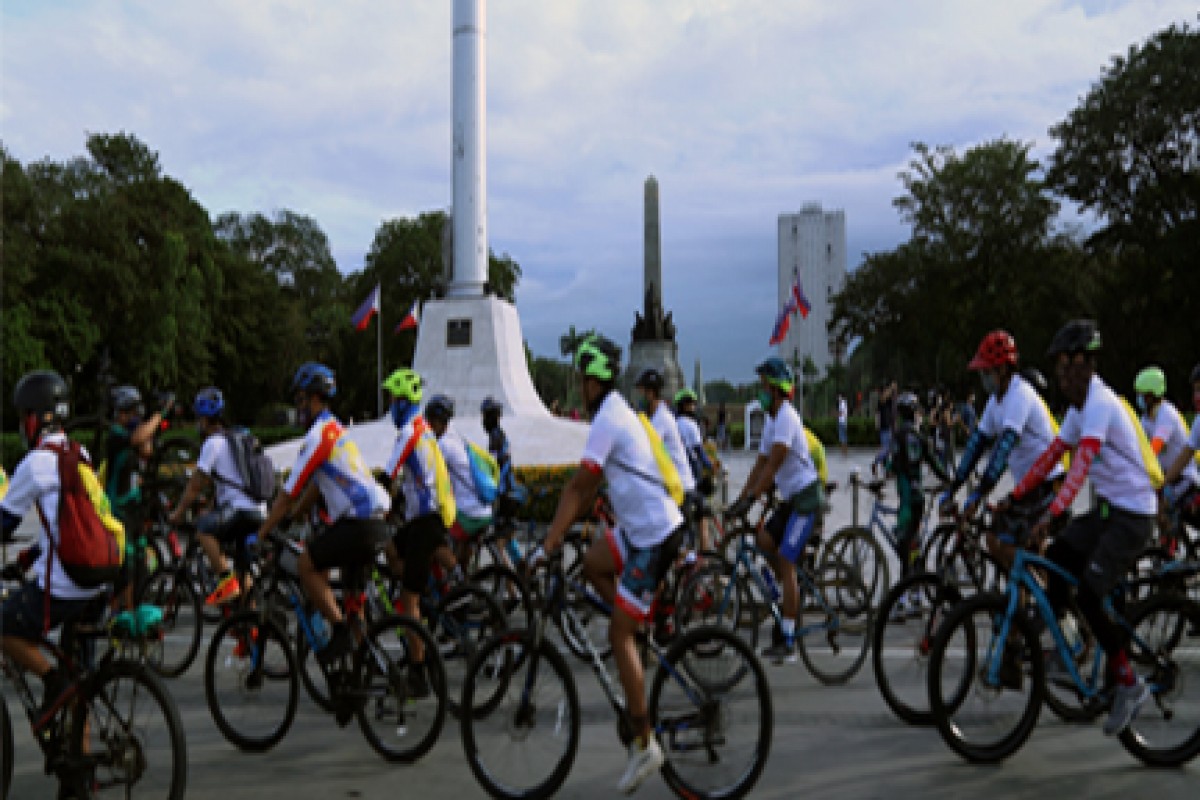 QUEZON CITY -- The Department of Environment and Natural Resources (DENR) has expressed its commitment to promote the interests of the bicycle-riding community, as a bicycle advocacy group lauded the agency's pivotal role in the annual celebration of the National Bicycle Day.

“Such is the robust partnership we have nurtured through the years with the bicycle-riding communities particularly the National Bicycle Organization (NBO) who has come out strongly for President Rodrigo Roa Duterte’s issuance of Presidential Proclamation (PP) 1052,“ said DENR Secretary Roy A. Cimatu.

During this year's celebration of the National Bicycle Day held on November 28, DENR Undersecretary for Solid Waste Management and Local Government Units Concerns Benny D. Anitporda received from the NBO a bicycle sculpture made of bronze in recognition of his "remarkable contribution as a bicycle advocate."

NBO Director Benedict Camara noted that it was Antiporda’s efforts through the office of Senator Christopher "Bong" Go that the bicycle groups desired for a nationwide observance of Bicycle Day through the issuance of PP 1052.

On November 18, 2020, President Duterte issued PP 1052 declaring the fourth Sunday of November of every year as National Bicycle Day, to encourage Filipinos to promote bicycle as a sustainable and environment-friendly mode of transportation.

In receiving the award, Antiporda expressed his desire that the new set of leaders in 2022 would continue and build on the gains of the DENR under the Duterte administration through DENR Secretary Cimatu, particularly those that promote the interest of the bicycle-riding public.

"We need you to ask the candidates to stand up for cycling, walking, and a healthier future. Take advantage of this electoral exercise and choose the champions for greener travel and respect for bicycle riders especially in the use of bicycle lanes," Antiporda said.

This year's National Bicycle Day was celebrated by more than 300 bikers, representing 61 bikers' groups, through a 26-kilometer bike parade from the DENR grounds in Quezon City to the Centennial Park in Navotas City where the celebration rites were held.

"This activity also serves to inspire and empower other advocates from the private sector to create activities for the benefit, enjoyment, and support of cycling advocacy and the cycling community nationwide," Camara said.

He hailed PP 1052 as a "big stepping stone to having laws that will promote bicycling as a major form of transportation and to spur the potential of the bicycling sector as a contributor to the country’s economic recovery."

The NBO has been advocating for bicycle and pedestrian-friendly legislation and implementation through a partnership with public and private organizations at the local, regional and national levels.

Camara also credited PP 1052 and the designation of bike lanes and bike patrol as among the reasons that fueled NBO’s plan to push for the promotion of bike ecotourism in the country.

"With the help of the DENR, we can develop bike ecotourism in the country," Camara also said, noting that a dry-run has already been undertaken covering the Antipolo eco-bike tour route with the Metro Manila tour now on the drawing board.

He also thanked the DENR for their donation of bike racks to the local government of Navotas whose board council has passed a resolution calling for the designation of bike lanes within the city.

According to Ching Salinas, head of the Bike Lanes Program Office of the Metropolitan Manila Development Authority, around 313 kilometers of roads are now designated as bike lanes in major thoroughfares in Metro Manila. (DENR)