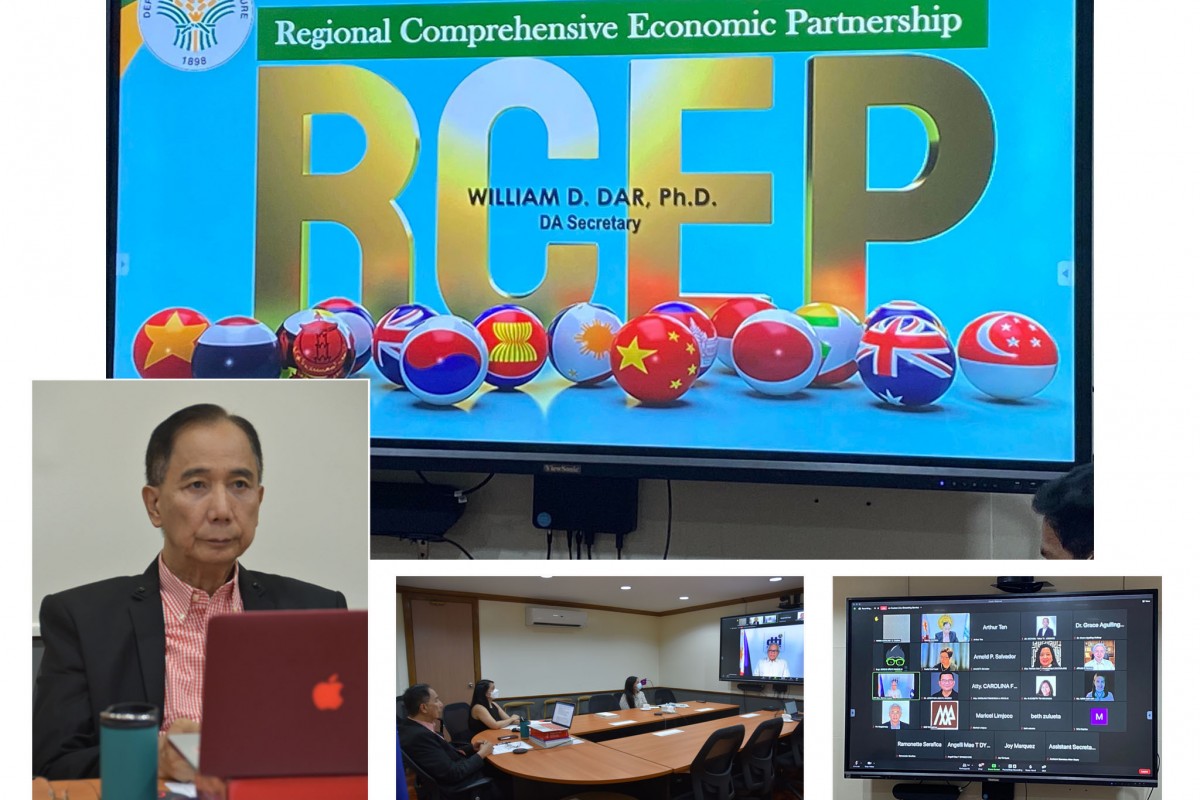 QUEZON CITY -- “We already established products that are competitive in the world market. This is the time to elevate our game by thinking beyond local markets,” Agriculture Secretary William Dar said in support of the country’s participation in the Regional Comprehensive Economic Partnership (RCEP).

Secretary Dar highlighted how the RCEP, which is considered the world’s largest regional trade agreement, would benefit Philippine agriculture during the panel discussion entitled “RCEP: Should we get in now?” hosted by the Management Association of the Philippines (MAP) on March 24, 2022.

He said that new partnerships driving the global economy can have positive and lasting impact on many industries and the Department of Agriculture (DA) is not wasting time to create a competitive agriculture and fisheries sector.

“With the Philippines’ accession to this mega trade partnership, we could be looking at an expanded trade and liberalization that come with many benefits such as lower trade barriers, improved market access, more streamlined custom-related procedures, and support zero-tariff products, among others,” he added.

In terms of exports, the share of agriculture in total foreign trade in 2019 was at 9.4 percent according to the Philippine Statistics Authority (PSA). The bulk of this share from the export earnings comes from high-value commodities such as coconut, banana, pineapple, rubber, and tobacco.

However, Secretary Dar noted that the country’s budget for the high-value crops industry is only P1.5 billion, considering the potentials in coconuts, banana, pineapples, and mangoes.

“Our national leadership must pan attention to agriculture sincerely and willfully. It must become a budgetary priority, if not the topmost one,” the agri chief urged.

According to him, Philippine agriculture is a sleeping giant and with RCEP, the country will be on its way towards transforming the sector, making it prosperous and world-class.

“We do not want to be left behind. We have to make agriculture a priority and align our national priorities towards improving local productivity before we can truly become an export-oriented sector,” the DA chief said.

He added that the DA already devised strategies commensurate with the trading atmosphere and its demands. The strategies include farm consolidation to industrialize and modernize through the realization of economies of scale, attention to the entire value chain to gain competitive advantage, more investments in research and development, and strengthening social cohesion, among others.

“I fully agree with Trade Chief Ramon Lopez when he said that the benefits of RCEP to the Philippines far outweigh the cost of not joining. Our participation in this mega trade pact is imperative to our economic growth, which is set to boost the state of our trade and investments. RCEP is arguably our best response in recovering and reenergizing our economy, especially after this pandemic,” the agri chief underscored. (GCeles Bejarin, DA-AFID)