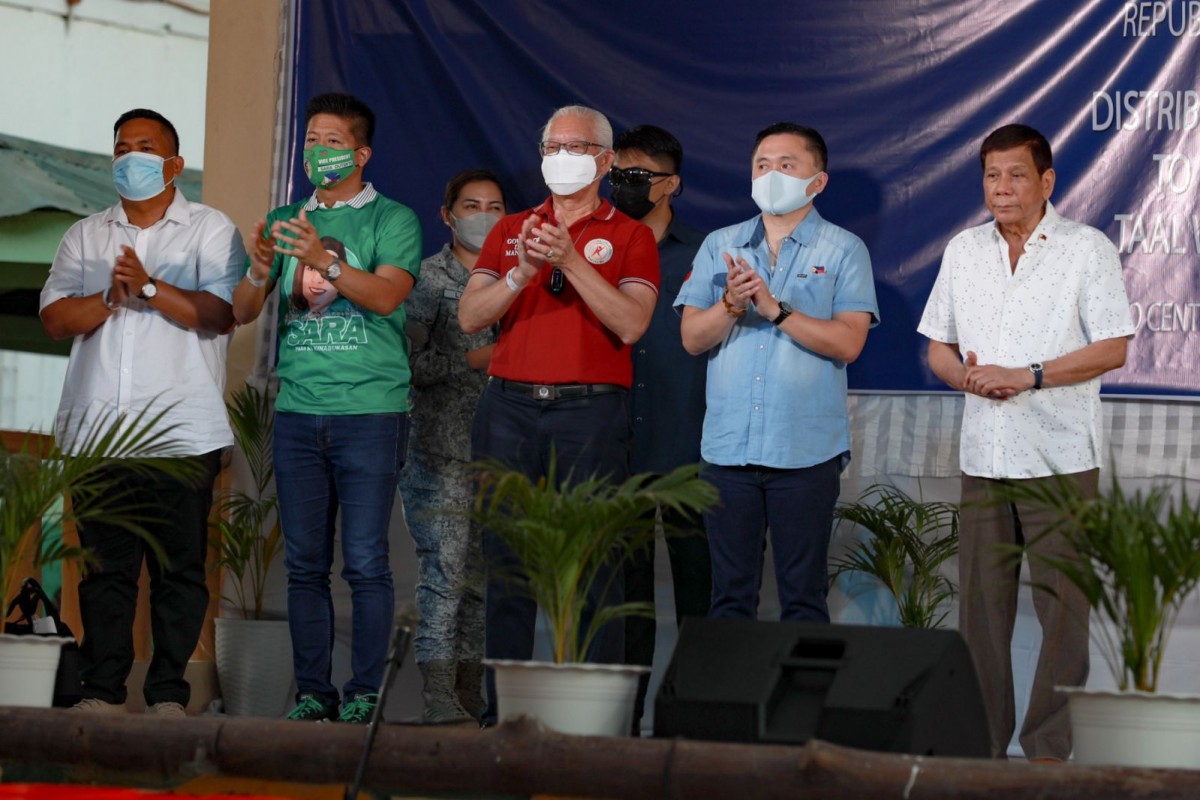 The activity was held at the Agoncillo Central Elementary School where President Duterte and Senator Go joined concerned national agencies and local officials led by Batangas Governor Hermilando Mandanas and Agoncillo Mayor Daniel Reyes in the distribution of various forms of emergency assistance.

Among those provided were grocery packs, personal protective equipment, water containers, alcohol, maternity and newborn kits, and food, for 100 affected families who are temporarily taking shelter in the said school.

In addition, the Department of Social Welfare and Development committed to provide additional funds for other forms of assistance needed by the affected communities.

Taal Volcano was placed on Alert Level 3 last March 26 and since then, the Regional Disaster Risk Reduction and Management Council in CALABARZON reported that 4,135 individuals were still staying in 21 evacuation centers in Lemery, Agoncillo and Laurel towns as of April 4.

Go has earlier called on the public for continued and full cooperation amid the Taal volcano unrest. The senator recounted how the cooperation between the public and the government during the eruption of Taal volcano back in 2020 played a significant role in helping the victims get back on their feet.

“We can still vividly recall how Mt. Taal had just erupted a few weeks before we implemented community quarantines due to the virus in 2020. It was a difficult time for many of our people, especially for my fellow Batangueños,” Go remarked, who is an adopted son of CALABARZON.

“As we were hit hard by the eruption, we have to conduct the gargantuan task of undertaking evacuations, relief and rescue operations. Thanks to the fast response of the government and the cooperation of the public, we were able to pull through,” he continued.

Go, who belongs to the Tesoro clan that comes from Batangas, then encouraged his fellow Batangueños residing in the danger zones to stay alert and resilient as he reassured them that they will likewise overcome this challenge with full assistance from the government.

“Rest assured that we will do our best to help those affected and in need of assistance. President Rodrigo Duterte and I, together with concerned national agencies, will ensure that all hands are on deck and ready to support communities in crisis,” he stressed.

The senator also renewed his call for the swift passage of measures that will enhance the country’s disaster response particularly in helping the displaced and other victims of disasters. These include Senate Bill 1228 which provides for the establishment of an evacuation center in every province, city and municipality; SBN 1227 which will provide displaced Filipinos with a rental subsidy so they can access decent housing during the relocation process; and SBN 205 which will establish the Department of Disaster Resilience.

Finally, Senator Go reassured that he will continue providing the necessary support to the poor and vulnerable in the region and across the country as he appealed to the Filipinos nationwide to remain supportive of the government.

“I only ask of you to further strengthen and deepen the solidarity you have nurtured with us so we can pull through together as one,” he said.

“We can always draw courage and motivation from each other to withstand and surpass all the challenges we face, and declare: Kayang-kaya natin ito!" he stressed.

Earlier that day, Duterte and Go also visited Mataasnakahoy to inspect the evacuation center there. (OSBG)