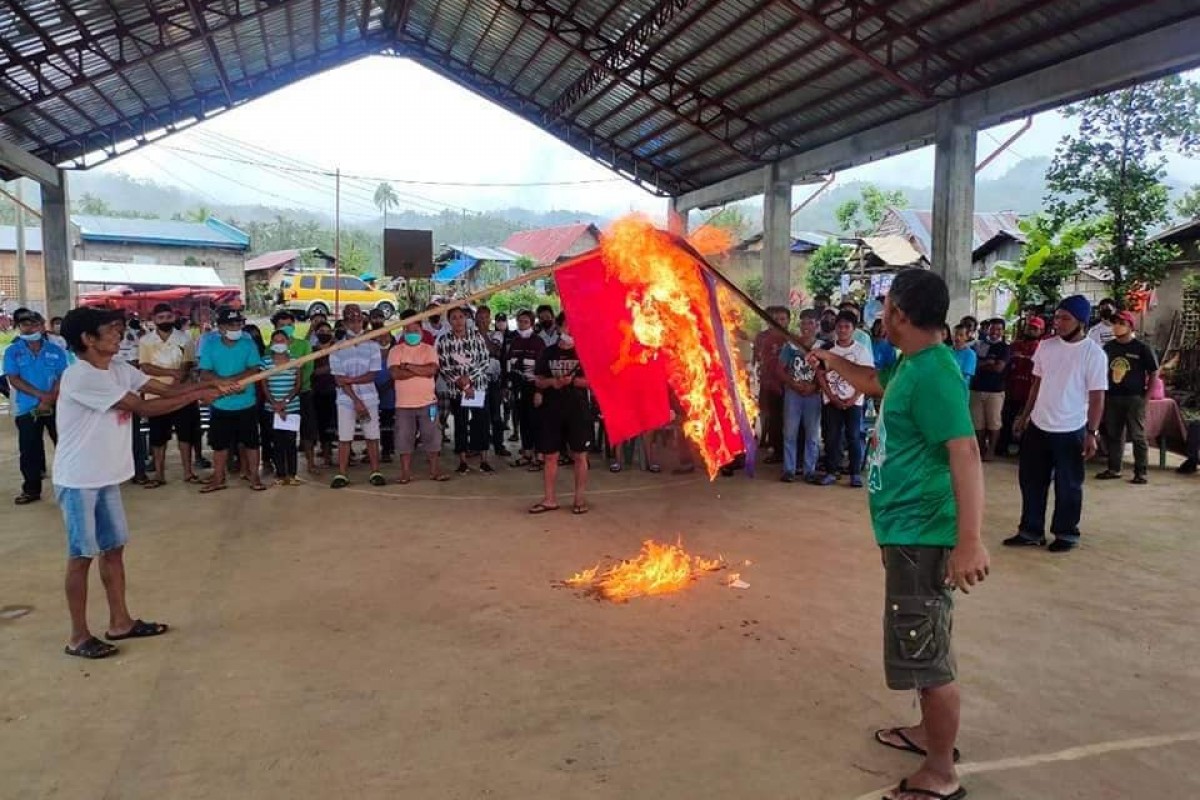 Of the 69 mass supporters, one is a CPP candidate member who took oath to the party and have undergone military training. Thirty-one were contacts of the CPP-NPA, six were informants tasked for “gawaing paniktik,” and the remaining 31 were couriers for their food and logistical needs.

Also present during the activity were representatives from the St. Bernanrd Municipal Police Station (MPS), Municipal Health Office (MHO), Municipal Social Worker and Development Office (MSWDO), Public Employment Service Office (PESO), and the Office of the Municipal Assessor Office in order to immediately facilitate the distribution of food packs, vitamins, medicines and free health consultation to the said communities as manifestation of their commitment in ending the local communist armed conflict.

During the activity, the 69 supporters burned the CPP-NPA-NDF flag as a symbol of their abandonment and renunciation of the terrorist group.

Pacita Correa alias “Ellen,” Realyn Lombog alias “Shane,” and Emma Lorren, all former members of the CPP-NPA-NDF who have surrendered to 14IB, gave testimonies of their bad experiences while being with the terrorist group.

The 69 former mass supporters were organized to support the recovery effort of the CPP-NPA-NDF in the area.

According to alias “Isang,” they were taught with NPA courses such as Introduction to PADEPA (Pambansang Demokratikong Paaralan), AgRev (Agrarian Revolution) and MKLRP (Maikling Kurso sa Lipunan at Rebolusyong Pilipino).

Also, the terrorist group organized “Hungos” which translates to “Pagtutulungan” composed of youth, women and farmers. Such meetings were secretly held at different locations including the auditorium, Kalahi facility, farmland, vicinity of the water reservoir, and in the outskirts of Brgy. Old Kauswagan.

Another mass supporter identified as Alias “Roy” revealed that he was promised of a reward in a form of sexual favor to a female NPA member if he join the armed group and undergo military trainings inside the NPA hide-outs. However, he refused after realizing that it was only a bait for him to become a full-time member.

According to Alias “Jerry,” the terrorist armed group visited their barangay after the onslaught of Typhoon "Odette" where the mass supporters covertly provided foods and their other basic needs. Further, the terrorist went to their farmlands and demanded for a share of their harvest which they obliged to give in due to fear of the terrorist NPA.

”They will become partners of the MTF-ELCAC of Saint Bernard in ending the local communist armed conflict in the area,” Dela Rosa said.

Meanwhile, Mayor Calapre said that the localized peace engagement activity  convinced the former mass supporters to withdraw their support from the CPP-NPA-NDF.

He further mentioned that he will implement the various programs of MFT-ELCAC since this is an effective way to attain lasting peace and sustainable development in his municipality.

“As your mayor, it is my desire to have a peaceful municipality and we could attain this by supporting the programs of the TF-ELCAC. We continue our call for them to surrender and end this insurgency,” Mayor Calapre said.

Colonel Noel Vestuir, 802nd Brigade commander, admired the courage of the 69 former mass supporters who stand against the CPP-NPA-NDF.

“Their withdrawal of support from the terrorist group would certainly negate the recovery efforts and denied their exploitation, control and influence in the interior barangays,” Col. Vestuir said.

Col. Vestuir also expressed his gratitude to the local government unit of Saint Bernard through Mayor Calapre, the LPE team composed of 14IB, Southern Leyte PNP, other government agencies and stakeholders for initiating the activity and providing immediate assistance in the conduct of the Community Support Program in the area. (802nd Infantry Brigade, 8ID, PA)