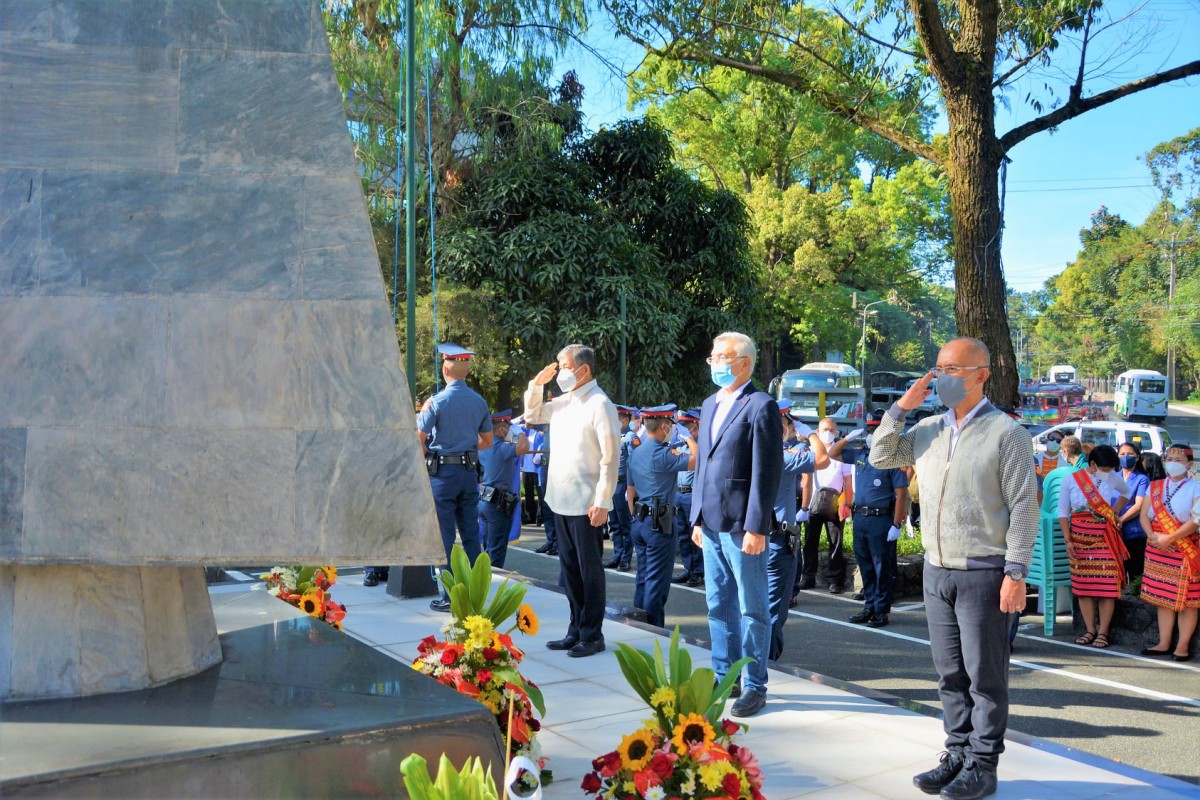 QUEZON CITY- The people of Baguio convened face-to-face for the first time since the pandemic hit two years ago to commemorate the city’s 77th Liberation Day on April 27, 2022 at the Veterans Park, Harrison Road, Baguio City. Philippine Veterans Affairs Office (PVAO) Administrator, Undersecretary Ernesto G. Carolina served as the Guest of Honor and Speaker during the commemoration.

Usec. Carolina, together with Baguio City Mayor Benjamin B. Magalong and Representative Marquez O. Go, led the wreath laying rites. The 21-gun salute and the melancholic one-bugle Taps comprised the military honors accorded to the fallen soldiers of the World War II in Baguio.

In his message, Representative Marquez Go shared that April 27 in Baguio is both a celebration and a commemoration as veterans are remembered for their sacrifices, and their victories over the Japanese Forces are celebrated.

“We celebrate the resilience and courage they summoned to endure against overwhelming acts. We are also commemorating the sacrifice made by the fallen soldiers who fought so that we can live with liberty and freedom from tyranny and oppression,” he said.

Mayor Magalong added that the sacrifices of the Baguio veterans will forever be remembered by the people. “Their sacrifices will never be in vain for today’s generation of citizens stand steadfast to be warriors in peace,” he said.

“Those who led the liberation of Baguio 77 years ago can show us the way to a comfortable peace and away from inflicting wars,” he added.

Usec. Carolina emphasized the significance of the Liberation of Baguio to the overall Philippine Liberation campaign during the Second World War. He noted that the victory in Baguio paved the way to subsequent victories against Japanese forces in different parts of Norther Luzon including the Battle of Bessang Pass in Ilocos Sur and the Battle of Kiangan in Ifugao.

As history contributes to the shaping of the citizens’ sense of pride and love for country, USec. Carolina also called on the people of Baguio to tell and retell the stories and heroic deeds of the Filipino veterans, specifically the Igorot guerillas. “The duty of propagating the heroic deeds of our Filipino veterans does not solely fall on the government, nor does it rest on the shoulders of the historians alone,” he said.

He explained that sparking the interest of the youth about the country’s great history and inculcating in them patriotism and love of country should be a joint effort among every Filipino. “It takes a whole nation, a community of grateful people, to help breed our country’s future defenders,” he added.

The World War II in the Philippines started and ended in Baguio City. It started on December 8, 1941 when Japanese war planes from Taiwan attacked Camp John Hay, and ended on September 3, 1945 when General Tomoyuki Yamashita signed the instruments of surrender, also in Camp John Hay.

With this great significance in the Philippine’s history, Usec. Carolina proposed to build a better and bigger park or shrine dedicated to the veterans who fought and died for Baguio’s liberty.

He emphasized that it is high time to give importance, and find a place in Baguio where not only Baguio people and people from the Cordillera, but all Filipinos can convene. “Na pag punta nila sa Baguio, alam nila puntahan yung Liberation Shrine para malaman ang tunay na papel ng mga Pilipino sa pagpapalaya ng ating bayan (That when they go to Baguio, they will go to the Liberation Shrine to know the actual role of the Filipinos in liberating the country),” Usec. Carolina said.

The Allied Forces, with troops from the 129th Infantry Regiment, entered Baguio on April 24. After days of fighting Japanese forces, Baguio was finally liberated on April 27, 1945. (PVAO)