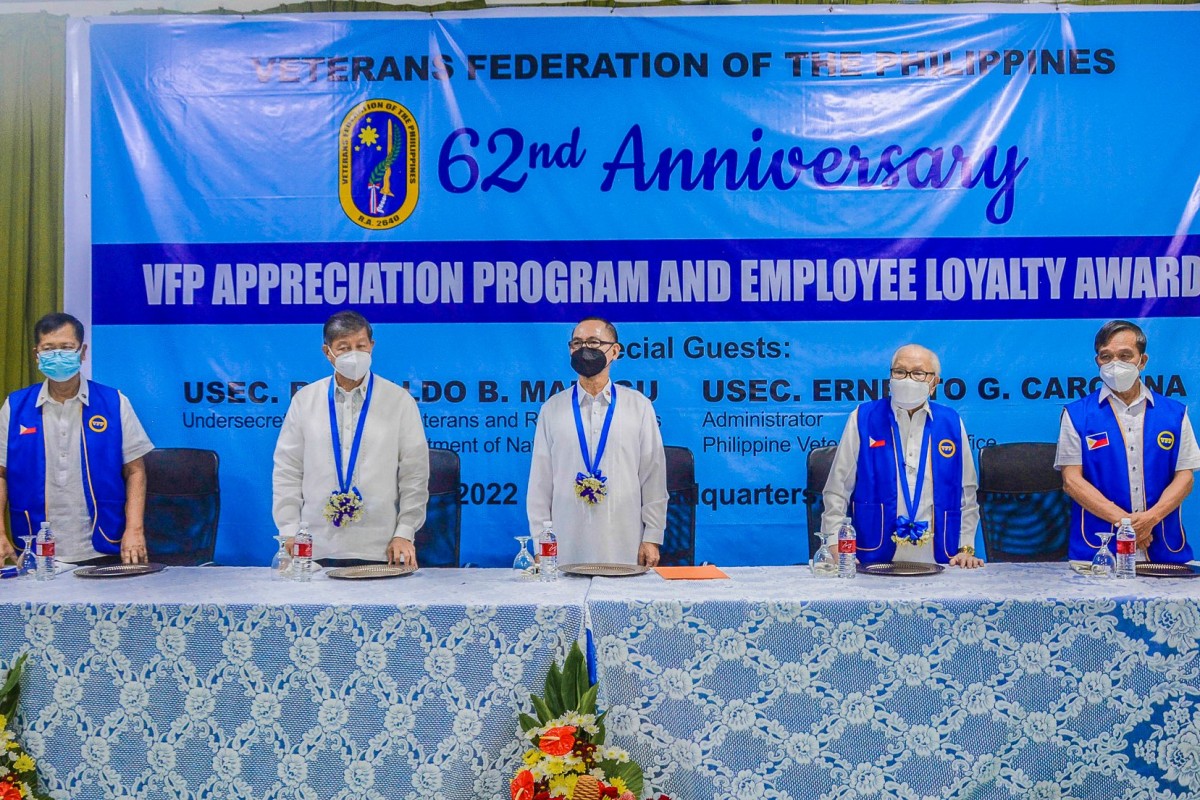 QUEZON CITY - The Department of National Defense, together with the Philippine Veterans Affairs Office (PVAO), joined the Veterans Federation of the Philippines (VFP) in the celebration of its 62nd Founding Anniversary on 17 June 2022 at Arroceros, Ermita, Manila.

In his message, USec. Ernesto G. Carolina, PVAO Administrator, echoed Defense Secretary Delfin N. Lorenzana’s satisfaction in the VFP’s remarkable achievements over the years. He also underscored the stronger collaboration between the main office of the VFP and its grassroots organizations as the Federation’s most notable transformation.

“We have done a great feat in bringing in more people to be part of that grassroots organization—to be part not only to receive benefits but to participate in spreading a gospel that we [VFP] are here to contribute to national development,” USec. Carolina added.

Undersecretary Reynaldo B. Mapagu, the Undersecretary for Civil, Veterans and Retiree Affairs (USCVRA) of the Department of National Defense, congratulated the leadership of the VFP for its efforts in improving its systems and processes, and realizing the vision of the Secretary of Defense to reform the VFP.

“I hope these efforts that we have started will be sustained in the next administration for the sake of the country’s veterans,” USec. Mapagu stated, expressing optimism that even after the new administration takes over, the VFP will continue to fulfill its main purpose which is to “exist solely for purposes of a benevolent character,” as stated in R.A. 2640, Section 4.

Meanwhile, Col. Pobre, Acting President of the VFP, announced during his speech some of the noteworthy developments of the VFP. One of which is the collection of almost 600 million pesos’ worth of revenues from real estate holding in Taguig City, which is 20% more of what has been collected previously.

There has also been a large increase of its members to 75,000 individuals coming from the different parts of the country. This significant feat has been made possible by the vigorous campaign of the operations department of the VFP. Col. Pobre also reiterated that these thousands of new members shall be accorded with the same benefits and rights being given to their predecessors. Among these entitlements are the health care assistance, natural calamity assistance, wake assistance, and the COVID-19 infection assistance.

The VFP is a public corporation created by virtue of Republic Act No. 2640 enacted on 18 June 1960. The Federation is composed of 17 charter organizations which aim to uphold the interests and render utmost care to all veterans, their surviving spouses and orphans through its member organizations, and perpetuate their heroic deeds. Under the said law, the Secretary of National Defense, through PVAO, supervises the VFP operations and other affairs.(PVAO)