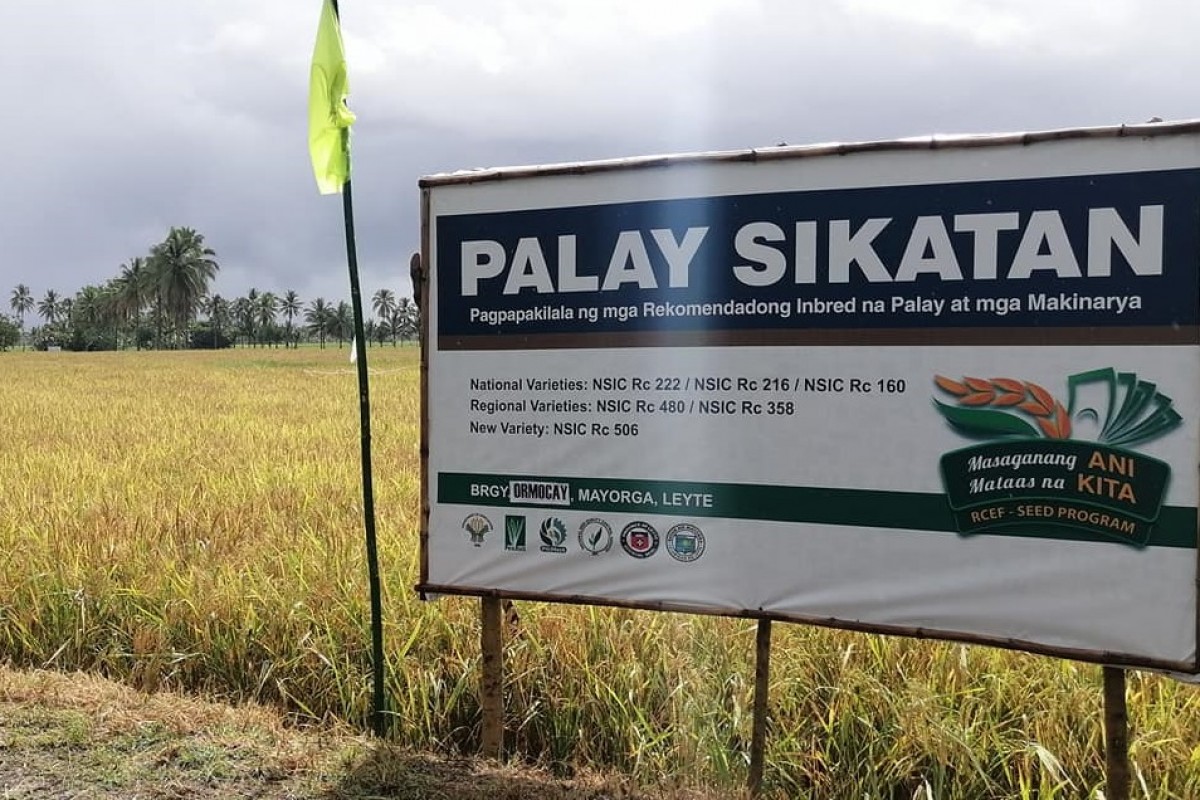 “We want farmers to personally experience the technologies and practices that we introduced. Because they do it themselves, they can witness and prove its efficiency. We are here to provide technical assistance from seed to seed,” RCEF Seed Program Field Operations and Monitoring Head Rizal Corales says.

Among the nationally recommended rice varieties being promoted include NSIC Rc 222, Rc 216, and Rc 402 for the 2021 wet season to 2023 dry season. Location-specific varieties are also being cultivated in the techno demo, each varying according to the region and province where the site has been established.

“The seeds we are promoting are already pre-identified based on its adaptability in the area. When we say ‘national recommended varieties, these are suited anywhere in the country and anytime of the year,” Corales explains.

The program also strongly recommends the adoption of seeding rate for inbred rice, which is 40kg/ha when transplanted, or 60-80kg/ha when direct-seeded.

PalaySikatan farmer-cooperators are also encouraged to use nutrient diagnostic tools like the Minus-one Element Technique (MOET), a simple and practical diagnostic tool in assessing soil nutrient limitations in actual field conditions. It analyzes the main nutrients: nitrogen, phosphorus, and potassium, including the trace elements: copper, zinc, and sulfur, and provides more accurate fertilizer recommendations by determining the right element, amount and time of application.

Farm machines like seeders, spreaders, and transplanters for crop establishment, and combine harvester for harvesting are also strongly showcased in PalaySikatan.

Direct-seeded areas try the seed spreader, precision seeds and drum seeder while transplanted areas use the mechanical transplanters for planting. This enables farmers to follow the recommended seeding rate, and reduce work time and labor.

Compared with the conventional harvesting which can take at least one week per hectare, the combine harvester, which performs harvesting and threshing operations can help farmers harvest 4 to 5 hectares per day.

These recommendations are seen to help increase farmers’ yield and income, and reduce production cost. During the 2021 wet season, farmers who served as cooperators of the techno demo have decreased their average production cost by at least P3.00. From P12.01/kg, it was reduced to P8.75/kg.

At the end of the cropping season, field days are conducted to showcase the crop stand of the PalaySikatan farmer-cooperators. Farmers from nearby communities visit the sites and evaluate the varieties they see. They also get to discuss with the cooperators the findings of the demo.

DA-PhilRice partners with the Provincial and Municipal Agricultural Offices in each LGU to identify the locations where they can put up the techno demo sites. They work closely in the field from technical briefings to harvesting, as well as from logistics to facilitating field days and field walks.

“Our local government units (LGUs) play a significant role in PalaySikatan, as they work with us in almost every activity that we conduct in our sites,” Corales shares.

Also helping in the implementation are the other RCEF implementing agencies which include PhilMech, Agricultural Training Institute, TESDA, Development Bank of the Philippines, and LandBank.

According to Guiguinto Technician Roslyn Joan Benedictos, techno demo activities like PalaySikatan is an effective way to help farmers become more open to modern technologies and machinery they can employ to improve their farming practices.

Farmer Orlando B. Cruz, 58, from Guiguinto, Bulacan, harvested 9.6 tons per hectare and earned P84,800 by planting NSIC Rc 436 he received from the RCEF Seed Program of the DA-PhilRice. His farm also served as one of the PalaySikatan technology demonstration sites of the municipality.

Since the program continuously educates rice farmers about modern technologies, Mang Orlando seizes this opportunity to enhance his farming knowledge, which will help him increase his yield and income.

“Who would have thought that my harvest could reach 9.6 tons? I, too, am surprised. Indeed, everything is possible as long as you are hardworking and open to challenges in farming,” shares Mang Orlando.

For Mang Orlando, welcoming new technologies is part of his smart game plan now so he can lower his production expenses and increase his profit.

“May we continue participating in activities [like PalaySikatan] so we can acquire new knowledge,” he says.

The RCEF-Seed Program is a component of Republic Act 11203 or Rice Tariffication Law, which allots P10 billion funds every year for the rice farmers from the rice tariff earnings of the country. The program is a six-year government initiative to help farmers improve their competitiveness. The local government units and lawmakers assist in its implementation.

Mandated to help ensure a rice-secure Philippines, DA-PhilRice leads the RCEF-Seed Program. It is also the government’s lead agency on rice research and development. (DA-PhilRice)