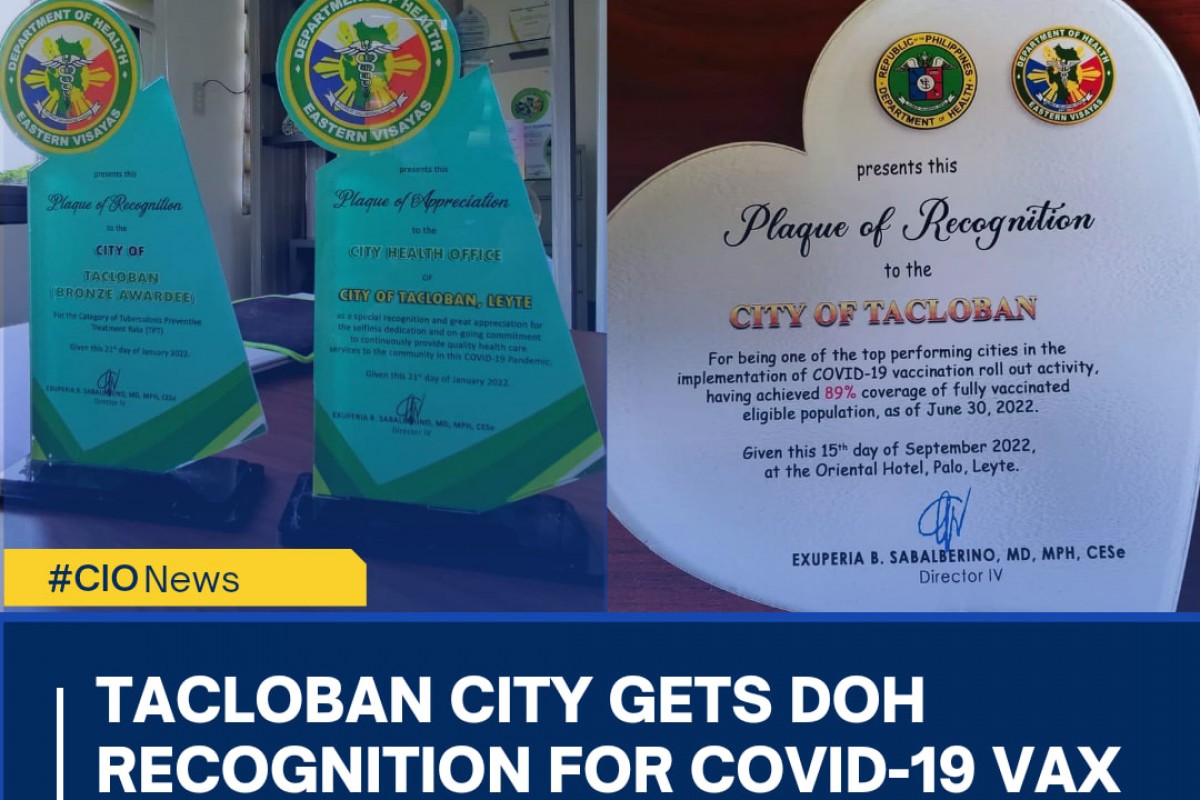 TACLOBAN CITY -- The Local Government Unit (LGU) of Tacloban City received recognition for its health programs during the Regional Awarding of Health Achievers held on September 15, 2022. The awarding ceremony spearheaded by the Department of Health (DOH) Eastern Visayas, which recognized the health initiatives of LGUs around the region, was held at the Oriental Hotel in Palo, Leyte.

LGU Tacloban was cited as the Top 1 Performing City for its COVID-19 vaccination program, having garnered 89% inoculation coverage while it copped the Bronze Award for the TB Preventive Treatment Rate (TPT) Category.

City Health Officer Danilo Ecarma, who received the awards, credited the widespread information drive of the LGU on COVID-19 for the significant success of the inoculation program.

The health officer said that per their record, Tacloban City has a general percentage of 104% for its vaccination coverage.

He, however, noted that the vaccination rate for the A2 Category (senior citizens 60 years old and above) was behind its target of 22,568.

On the other hand, the rate of senior citizens getting booster shots was significantly lower, according to the CHO.

Only 4,942 had their first booster dose, while a mere 1,177 elderly people availed themselves of the second booster shot.

The official reiterated the importance of getting booster shots. He said that having only the primary vaccination series (first and second doses) will never be enough, as vaccine efficacy wanes to about 50% after four months.

For this purpose, the City Government has moved the vaccination drive to the district health centers for easy accessibility.

As for the TB control program, Ecarma also disclosed that tuberculosis remains a public health concern in the city as it records 1,200 cases annually.

Reportedly, a TB patient can infect 10-15 people a year if left untreated. He further  said that the city government has been proactive in this area by providing free services such as consultations and free medicines.

Meanwhile, DOH Undersecretary Abdullah B. Dumama, Jr. and DOH 8 Director Exuperia Sabalbareno led the officials of the health department in handing out plaques of recognition to the LGU awardees. (MMP/TCIO)